Who speaks for Europe?

Who speaks for Europe? 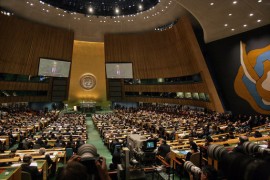 More of the fruits of Lisbon treaty: there is a proposal that the European Union should get the right to speak at the United Nations General Assembly. At present, the EU is merely an observer: the change will not make it a full member but will give its representatives the opportunity to express their views. The proposal has been agreed by the EU and will be submitted for approval at the UN itself later this year.

The policies expressed by the EU representative will be those agreed by the member states, and agreed by unanimity. The suggestion that there will be things said that a member state disagrees with is therefore not correct. However, because unanimous decision-making tends to result in lowest common denominator outcomes, there will undoubtedly be things not said that a member state thinks ought to be expressed. However, without an EU presence, nothing will be said of a European view, not even the good bits.

This view of the EU depends, of curse, on one’s view of the member states. If you think that the world still revolves around them, then maybe an EU voice is not for you. But if, like this website, you recognise that Europe represents a declining proportion of the world’s population and the world’s trade, and that power backed up by military force is increasingly less relevant than power backed up by other means, then an EU foreign policy has the potential to be more credible and more effective than a collection of 27 national foreign policies. The word “potential” in that previous sentence is important: the EU is not entitled to assume its own importance, it has to earn it.

But who will the EU representative be? For most of the time, it will be someone from the new External Action Service, to be the official eyes and ears (and mouth) of the EU. The head of the External Action Service, Catherine Ashton, will be in overall charge of the EU position, but for the big set-piece occasions it will be President of the European Council Herman Van Rompuy who represents the EU.

It is good that there is an EU representative, but I can’t help thinking that it would have been better had it been the president of the European Commission. We summarised the arguments for a powerful voice in the world and an accountable president back in March 2003, during the European Convention. (Read the briefings here and here.) President Barroso, who leads the Commission, is accountable in public to the European Parliament, and took office after the elections to the EP. President Van Rompuy is accountable only to the heads of government meeting in private in the European Council, and was chosen not after a campaign involving the voters but following a series of discussions among the prime ministers. I prefer the accountability and mandate of the Commission president, and most federalists will do too.

However, I am a great believer in being grateful for what we have got. The president of the European Council (and this is not a personal reflection on President Van Rompuy) is better than nothing. “Not enough” is rarely an argument against an improvement in the constitutional system, whether we are talking about the limited devolution of the Scottish Parliament or the way in which the EU works: “not enough” is still more than we had before.