Would an independent Scotland keep the pound?

Would an independent Scotland keep the pound? 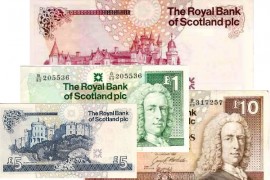 Scottish pounds – for much longer?

Alex Salmond used to be a strong advocate of joining the euro.  Back in the days when many people thought it was a good idea, Mr Salmond was one of the foremost proponents of the idea.  It was an economically advantageous move that would cement Scotland’s place in the politics of Europe.  How times have changed.

The fall of Lehman brothers in 2008 and the explosion of the UK financial services industry put paid to his vision of an Irish-Icelandic-Scottish “arc of prosperity”.  And the ensuing crisis in the eurozone made adoption of the euro rather less popular.  So now that the independence of Scotland is to be decided by a referendum in September next year, the previously likely position of wanting to join the euro is no longer on the agenda.

In that case, what will Scotland do for a currency?

Instead, the white paper published by the Scottish government, Scotland’s Future, proposes a currency union between Scotland and the rest of the UK (rUK) based on sterling.  The Bank of England would, under this model, set interest rates according to the needs of the sterling area (and not just of rUK) and would be accountable to both governments in doing so.

This poses two questions.  First, would the rUK accept no longer being an independent country?  Allowing its central bank to be accountable to a foreign government could be taken as a diminution of national sovereignty, as would allowing its monetary policy to be set according to the needs of a foreign economy.  A nation state vision of monetary policy was one of the reasons why the UK refused to join the euro 15 years ago, back in the days when Alex Salmond was in favour, and it does not seem obvious to me that a referendum in Scotland will be allowed to change this position when a referendum in the UK as a whole was not.

The second question is about the fiscal coordination that would be required to make such a currency union work.  The white paper observes that:

a monetary framework will require a fiscal sustainability agreement between Scotland and the rest of the UK, which will apply to both governments and cover overall net borrowing and debt.

Again, why should the rUK agree to be part of such a fiscal agreement?  After all, there is political consensus that it was right to stay out of the EU’s fiscal compact treaty.  Can Alex Salmond do something that Angela Merkel could not?