A complete and indissoluble union

A complete and indissoluble union 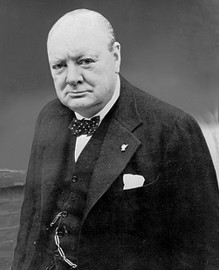 Seventy years ago, on 16 June 1940, the British government under Winston Churchill took the remarkable step of offering complete and indissoluble political union with France. The proposal was one of the most innovative in the history of the two countries. It read as follows:

At this most fateful moment in the history of the modern world The Governments of the United Kingdom and the French Republic make this declaration of indissoluble union and unyielding resolution in their common defence of justice and freedom against subjection to a system which reduces mankind to a life of robots and slaves.

The two governments declare that France and Great Britain shall no longer be two nations, but one Franco-British Union.

The constitution of the Union will provide for joint organs of defence, foreign, financial, and economic policies.

Both countries will share responsibility for the repair of the devastation of war, wherever it occurs in their territories, and the resources of both shall be equally, and as one, applied to the purpose.

During the war there shall be a single War Cabinet, and all the forces of Britain and France, whether on land, see, or in the air, will be placed under its direction. It will govern from wherever it best can. The two Parliaments will be formally associated. The nations of the British Empire are already forming new armies. France will keep her available forces in the field, on the sea, and in the air. The Union appeals to the United States to fortify the economic resources of the Allies, and to bring her powerful material aid to the common cause.

The Union will concentrate its whole energy against the power of the enemy, no matter where the battle may be.

And thus we shall conquer.

It was an act of desperation. Europe was in crisis. During the seven years since Hitler took power he had incorporated first Austria and then the Sudetenland into the German Reich, occupied what remained of Czechoslovakia, and overrun Poland. To help Poland but also thwart any further expansion Britain and France had then declared war.

After some months of comparative calm-the period of the so-called ‘phoney war’-Hitler’s troops had launched their spring offensive through neutral Belgium and the Netherland, thus by-passing France’s main line of defence (the Maginot line), hemming in the British at Dunkirk and pressing on towards Paris.

In the final days of May the British in Dunkirk had succeeded under heavy fire in evacuating 338,226 men (including 139,097 French) by ship, but at the high cost of six Royal Navy destroyers sunk and nineteen others damaged. The RAF lost 474 planes, while all the army’s heavy guns, tanks, and military transport had to be abandoned.

Meanwhile the enemy had reached the heartland of France. To save Paris from destruction the capital was declared an open city while the French government withdrew first to Tours, then to Bordeaux. Fearing that Hitler and his fascist allies might become the unchallenged masters of continental Europe, Churchill-who had replaced Neville Chamberlain as prime minister- crossed the Channel several times for emergency meetings to encourage his French counterpart Paul Reynaud to continue the fight and in particular to ensure that the French fleet did not fall into German hands.

Already in March Britain and France had signed an agreement that neither country would make a separate peace with Hitler. (2) It also contained a clause that in due course the agreement “might be expanded so as to give some contractual form to the continuance of Anglo-French economic and military collaboration after the end of the war.” Now, only two months later, the situation had changed radically.

Clearly something more was needed, some initiative which would raise the spirits of the defeated French-but what? The answer came not from the government but from the initiative of two civil servants, one British and one French, working in London as members of the Anglo-French Coordination Committee concerned with military supplies and at that moment dealing with the urgent need for more fighter aircraft. Arthur Salter and Jean Monnet had known each other since the 1914-1918 war when they had been engaged on a similar task. Conscious that only a grand gesture could keep the alliance intact they set about drawing up a draft declaration proposing a way of binding France and Britain more closely together: namely, that the two countries should become a single, indissoluble political union. (3) But how would such a political union function? Salter’s peacetime experience in the League of Nations administration had taught him that the “intrinsic weakness” of an inter-state institution which leaves national sovereignty unimpaired is that it can lead to “a deterioration in the relation between its principal members (which) can quickly reduce it to impotence.” His conclusion (4) therefore was that “a federation. . . is far preferable to an intergovernmental authority”.

Jean Monnet shared Salter’s views on the weakness of inter-governmental decision-making, though not his federalist aims. He deplored the allies’ current lack of a common command structure which meant that until then-despite the existence of the Anglo-French Supreme War Council – Britain and France each seemed at times to be fighting its own war rather than confronting the enemy as a united force. In the prevailing situation such weakness could no longer be afforded.

Despite their differences the two men succeeded in producing a five-page draft plan which they could both support. It proposed neither a federation nor simply a strengthening of the Anglo-French alliance but something in between: namely that “France and Great Britain shall no longer be two nations, but one Franco-British Union.” The two Parliaments would be united. There would be a single war cabinet and “all the forces of Britain and France whether on land, sea, or in the air, will be placed under its direction.” In other words, the two countries would become a single unified state.

Getting Churchill even to read this proposal proved to be impossible, essentially because–according to Churchill’s secretary Major Desmond Morton–Monnet lacked the necessary political standing to be able to speak for the French government. Persisting nevertheless, Monnet gathered together a small group to work on an improved draft. In addition to Salter and Major Morton it included the permanent secretary at the Foreign Office Sir Robert Vansittart and René Pleven of the French economic mission in London.

The deadlock was broken by the arrival in London of General Charles de Gaulle, newly appointed Secretary of State for War in the French Government. (5) “I am here to save the honour of France!” he is reported to have told Monnet’s wife Sylvia, and it was no boast. He read the draft text at a meeting with Monnet and the French ambassador Charles Corbin and was impressed. This, he said, could give Prime Minister Reynaud the courage to continue the fight, if necessary from France’s North African territories.

Winston Churchill states in his war memoirs (6) that he was “at a luncheon at the Carlton Club on the 15th of June when he first heard of the plan for an indissoluble Anglo-French union with the object of giving M. Reynaud some new fact of a vivid and stimulating nature with which to carry a majority of his cabinet into the move to Africa and the continuance of the war.” He does not mention that De Gaulle was also present and had handed him the draft text. His first reaction was “unfavourable”. He was “by no means convinced” he wrote in his account of the meeting.

But Reynaud had already asked for France to be released from her obligations under the “no separate peace” agreement. It meant that Britain could be left isolated. At the 16 June cabinet meeting Churchill reported on his conversation with De Gaulle who had stressed that “some very dramatic move was essential. . . to keep M. Reynaud’s Government in the war and that a proclamation of the indissoluble union of the French and British peoples would serve the purpose.”

Vansittart was instructed to draft “some dramatic announcement which might strengthen M .Reynaud’s hand.” The Foreign Secretary Lord Halifax called together a small group consisting of Vansittart, Jean Monnet, René Pleven, and Major Morton to begin work immediately on drafting a brief, final revision of the Declaration of Union (7). This was then discussed in Cabinet on the same day. Some minor changes were made and some major points dropped. Those excised included references to the establishment of a common Anglo-French customs area and a single currency. The provision that the two parliaments should ‘unite’ was altered to ‘be formally associated’. Its final two paragraphs emphasized the need for France to continue the fight. This, for Churchill, was the essential point.

Once the text was agreed General de Gaulle dictated it by telephone to Paul Reynaud’s office in France. He then made immediate arrangements to fly there in person, taking the written document with him. In Britain it was released to the press.

The following day Churchill was on his way for a meeting with Reynaud on board a British cruiser off the coast of Brittany when he received a telegram from the British ambassador in Bordeaux informing him that Marshal Philippe Pétain had replaced Reynaud as prime minister and was opening negotiations for an armistice. The plan had failed.

Whether an Anglo-French Union could have worked effectively at that point in time with most of France under enemy occupation is doubtful. Nor would it necessarily have survived in peacetime. For some British government members it was intended only to be a temporary expedient which would no longer be necessary once the war had been won.

But it did arouse interest and even enthusiasm when it was first announced. It planted questions in the public mind about the relationship between states and, in doing so, it challenged nationalism. Perhaps, too, it influenced Winston Churchill’s thoughts on the future shape of Europe. Speaking on the twin subjects of political unity and economic collaboration at the first Congress of Europe in The Hague in 1948 he pointed out (8) that “It is said with truth that this involves some sacrifice or merger of national sovereignty and characteristics, but it is also possible to regard it as the gradual assumption by all nations concerned of that larger sovereignty which can also protect their diverse and distinctive customs, and their national traditions.”