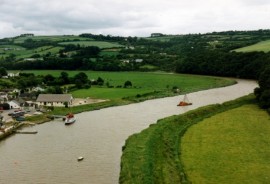 The River Tamar, "one of the oldest borders in Europe" (picture Michael Parry)

One of the planks of the coalition government’s platform is to reduce the number of members of the House of Commons and redraw the boundaries so that each constituency has roughly the same number of voters.  At present, the largest constituency – the Isle of Wight – has around 5 times the number of the smallest, Na H-Eileanan An Iar (the Western Isles).

Three seats in the north of Scotland will be spared this equalisation – they have large geographical areas already (and two of them have potentially troublesome Liberal Democrat MPs) – but otherwise the Boundary Commission will equalise remorselessly on.

Imagine if, rather than geographically, we were all represented in the House of Commons alphabetically, with MPs elected by all the people with surnames beginning with A, with B, with C and so on.  Who would suppose that such MPs could meaningfully represent the people who voted for them?  What would the voters have in common?  The self-identification of the citizens matters.

However, citizens do not neatly imagine themselves into equally-sized groupings, which makes drawing up realistic parliamentary constituencies hard.  Trade-offs have to be made between identity and size.  Most of the city of Cambridge, for example, is in the Cambridge constituency, but there is one ward of the city that spills over into neighbouring Cambridgeshire South, a constituency that stretches 10 miles into the countryside rather than 2 miles into the centre of town.

The determination of the government to reduce the disparities in size is going to make the disparities in identity worse.  In Cornwall, for example, there is concern that a constituency will be created that straddles the border with Devon: despite “the Tamar being one of the oldest borders in Europe” (say the campaigners).

Multi-member parliamentary constituencies could reduce the scale of this problem considerably, as they would be much more tolerant of different sizes of community, but that idea has been specifically excluded by the coalition government.  The only two electoral systems on offer in the referendum next spring both rely on single member constituencies.

This conflict between equality of the citizens – making all the constituencies the same size – and respecting their identities will occur again and again as the boundaries are redrawn.  Cornwall today is merely the start of something big.