Home/Archives/The first use of the term “democratic deficit” 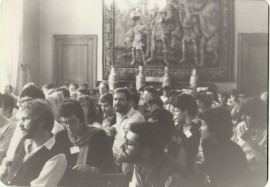 The JEF Manifesto was adopted by the JEF Congress in Berlin in 1977, and is believed to be the first recorded use of the phrase “democratic deficit”. The first chapter of that Manifesto appears below.

Chapter One : The Democratic Deficit

Looking at Europe today, it is clear that there is throughout our continent a “malaise”, a sense of alienation and a lack of confidence in the ability of the economic and political system to solve our problems. The spectacular increase in the number of campaigning pressure-groups, citizen’s action groups, and even spontaneous revolts is a symptom of the inadequacy of the current system to take into account people’s needs. Be it in the dole queue, in schools and universities, in underprivileged regions, in the neighbourhood of a proposed nuclear power station, at the place of work, in a migrant workers’ ghetto, or on the proposed route of a highway, people are fighting arbitrary decisions taken without regard to their needs and without them having participated in the making of a decision that affects their own lives.

Increasingly, these struggles are not only against the power of capital, but against the state itself or a branch of its bureaucracy. The state has had to take on an ever-increasing role that has historically developed parallel to the capitalist system, which itself has only been maintained by increased state support. In the 19th century, the nation state provided military protection, colonies, and customs barriers to protect domestic production. Functions which provide a framework for profitable economy were added in increasing numbers means of communication, energy and water supplies, education and further training. Today, the state directly intervenes in production, by taking over unprofitable sectors (coal mining, rail, aero research), paying for the social costs inflicted by inconsiderate production (environmental damage, urban renewal), and subsidising investment. In taking on these roles, the state has become enmeshed in a complex inter-relationship with industry and commerce. The aim of Keeping the system producing has been partially achieved, but the aim of controlling the abuses of the system and reforming it has not indeed the state has become part of the system.

This inability of the state to change the system, to carry out reforms and to resolve problems facing society is compounded by two vital factors. Firstly, (with one or two exceptions in western Europe), the state is a highly centralised huge bureaucratic complex, carrying out all its activities at the national level in a national context. Democracy and participation at the local and regional levels have been stifled. The state therefore seems all the more remote to the ordinary citizen, and the arbitrary nature of its decisions taken without the possibility of adequate consultation or knowledge of local effects, is increased. It means that many problems which can only be adequately dealt with at a local level, taking into account local peculiarities, are not being solved. Furthermore, regional differences and cultural peculiarities are being stifled.

Secondly, the highly industrialised nature of societies of Western Europe as well as political and economic interdependence have produced problems which are beyond the capabilities of a single nation state to control, let alone to solve (e.g. ensuring supplies of energy and raw materials, development aid, regional policy, environment, defence). In order to deal with these, it is necessary to transfer sovereignty. This means handing over decision-making competences to the European level and will result in a consequent weakening of national decision-making centres. Giving up power of one’s own accord, however, contradicts the claim of every government to keep political power in its own hands and to make all essential decisions by itself. Up to now the national governments have reacted to their inability to deal with European-level problems effectively in the interest of the people, by using window dressing. The few measures that have been taken to tackle European-level problems have been in an inter-governmental framework. Even the European Community, which contains the embryo of a European federation, is still essentially inter-governmental, with the decision-making power concentrated in the Council of (national) Ministers and its sub-structure, the Committee of Permanent Representatives (“COREPER”). This system, aggravated by the practice of veto-right for each country, merely achieves a compromise of national approaches, not a European solution.

At the same time as losing ability to influence decisions through governments, people also have little control over their own affairs at their place of work. As production units have become bigger, men and women have been reduced to the role of cog-wheels in a machine. The conflict between employer and employee, profit and effort, capital and labour, has not been reduced or changed, but is now increasingly fought on a higher more centralised level. This is also true of the conflicts between consumer and salesman, landlord and tenant, citizen and authority.

To give people control over their own lives and to give the word “democracy” a meaning, fundamental changes are needed in the areas outlined above. There needs to be created institutions capable of solving European-wide problems that have escaped the control of nation-states. There needs to be a fundamental shift of power down to the lower levels, closer to the people and to the problems. There needs to be an introduction of democracy at the place of work in order to transform the labour/capital conflict, and in the local community. We shall now look at these in turn.