B is for Beckett

B is for Beckett 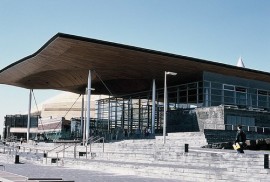 I was in Cardiff at the end of last week, visiting some officials in the Welsh Assembly Government and going down to Cardiff Bay to see the Assembly itself.

There is something noble about the National Assembly for Wales, set up only in 1999. Wales itself was incorporated into the English state in 1536, but prior to then had no representative parliament as we would know it today. (This is unlike Scotland, which had a parliament of its own until the Act of Union in 1707.) There was for a long time an inchoate sense of Welsh political identity – there was a strong sense of Welsh cultural identity, of course – and the National Assembly has started to give it a formal or tangible expression. (Read an article about the case for a Welsh parliament here.)

The Assembly building is sited at Cardiff Bay, which 100 years ago was the world’s busiest port, as coal mined from the valleys was brought down to the sea and exported all over the world. Cardiff may no longer be the beating heart of the world’s economy, but it can still pioneer new forms of democracy.

Fully 50 per cent of the members of the Welsh assembly are women, making it the first legislative body in the world to achieve this mark. Its new building is pioneering, too, cooled by an Earth Heat Exchange System and heated by wood to keep its environmental impact to a minimum. Welsh democracy is an experiment, but it is an experiment that is giving itself the best possible chance of succeeding.

I went down to Cardiff Bay for a discussion about Europe, not about Wales directly, but I was left thinking that European democracy is similarly an experiment. It is an attempt to give expression to the idea that Europeans have concerns in common which can only be dealt with, politically, in common. If Wales was independent in various forms several hundred years ago, Europe has never been united before.

Issues of human rights and the environment are common European concerns, not limited to any individual country. Even if Europe is responsible for a declining share of economic activity in the world – or perhaps especially because of this – it is still possible for Europeans to think imaginatively about the political and democratic future of their continent.

The latest example of this imaginative thinking to arrive in my in-box is “Plan B: How to Rescue the European Constitution”, by Andrew Duff MEP and published by Notre Europe. (You can read a summary of it here or download the whole document here.)

The impasse over the constitutional treaty after the French and Dutch No votes has to be brought to an end, and that in turn will only be done if there is an act of political daring to get the process restarted. That act is what Andrew Duff describes. He tries to analyse the reasons why the French and Dutch electorates voted No, and speculates on the concerns that might have been expressed in other countries had the ratification process got that far. Not for Andrew Duff the lazy assumption that France and the Netherlands are the only problems.

Having looked at the difficulties, Andrew Duff then deftly moves on to sketch some proposed solutions. The core of the constitutional treaty must survive, he insists, because (1) it works and (2) it has proved uncontroversial. The difficulties lay elsewhere, and they must be dealt with separately. He proposes codifying the current provisions on economic reform and enlargement, strengthening the commitment to fighting climate change, giving a new focus to social cooperation, and sorting out the EU’s finances. And he thinks some more about how the new edition of the constitution can be prepared.

All of this sounds good. It would be hard to say now that this is exactly how things will turn out in practice – I imagine that even Andrew Duff would be surprised if his prescription was followed to the letter – but I am sure that this is a much better view of events than that voiced last week by British foreign minister Margaret Beckett. “It’s a common failing, isn’t it? People started to get enthusiastic about a grandiose project but it didn’t come off,” she said. (I used Google to check the exact quote: “Margaret Beckett failing” comes up with more than 100,000 entries.)

If Margaret Beckett thinks that the European constitution can be talked about only in the past tense, I think she is in for a surprise. Reading Andrew Duff’s Plan B will help prepare her for it.