Why the euro did not cause the housing crash

Home/Blog/Why the euro did not cause the housing crash

Why the euro did not cause the housing crash 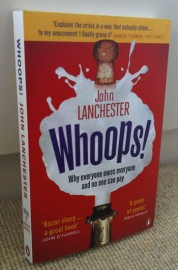 We quote an extract from the book “Whoops!” on the Quotebank here, explaining that action to regulate the banks should be international and not national.  But it wouldn’t be fair not to make clear that the author, John Lanchester, does not express sympathy with the idea that Britain should have joined the euro.

He writes, fairly, that our economy runs in some ways differently to other European countries (a much greater sensitivity to interest rate changes, for example) and this, he says, “is the single biggest reason why the UK has not joined the euro”.

John Lanchester goes on to write:

“If we had joined the euro and our mortgages were tied to those groovily low euro interest rates, money would have been even cheaper, and credit more easily available, so the housing bubble would have been even bigger, and the crash correspondingly crashier.  (Two examples of countries where that happened: Ireland and Spain.)”

But the second “would have” in that preceding paragraph is not correct.  The booms and crashes in Ireland and Spain arose from much more than just low interest rates, and correspondingly there were things that could have been done to address the problem but which were not done.  In both Spain and Ireland, the craze for borrowing cheaply to pay for housing fuelled not only house purchases but construction, with the consequence that the crash affected not only homeowners but also anybody with a job or an investment in a large section of the economy.

And there was not merely an over-supply of housing, but both Irish and Spanish economies were also over-exposed to construction.  Against an EU average of 12 per cent of GDP, construction in Spain peaked at 16 per cent of GDP, and in Ireland it reached 23 per cent.  A fall in house prices is one thing, a collapse in the largest sector of the economy is quite another.