Could the European elections choose the next Commission president?

Home/Latest News/Could the European elections choose the next Commission president?

Could the European elections choose the next Commission president? 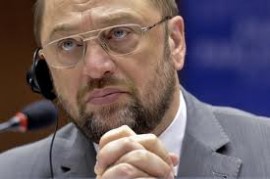 The Federal Union committee discussed the rise of eurosceptic political parties in Europe and the prospect that they might make significant gains at the European elections in May.  Could they gain enough seats to inhibit the ability of the EP to play its proper role in the democratic life of Europe?

These parties may be strong in some countries, such as the UK and France, but they are weak in others, such as Spain and Germany, and non-existent in others still.  The likelihood that they will get more than 20 per cent of the seats must therefore be very low.  The tendency of the mainstream parties to cooperate ought to be strengthened by this development, in which case the major political developments required should still be possible.

An important factor, though, is the achievement of cross-party consensus on what needs to be done.  A crucial element in this will be the choice of president of the European Commission.

The socialists have chosen Martin Schulz, currently president of the European Parliament.  The ALDE group is choosing between Olli Rehn, European commissioner for Economic and Monetary Affairs and formerly responsible for Enlargement, and Guy Verhofstat, leader of the Liberals in the European Parliament and formerly prime minister of Belgium.  The Greens are holding an open primary online (cast your vote here) for a top candidate, while the Christian Democrats have allowed themselves until a convention in March to make their choice.  Among their possible nominees are former Luxembourg prime minister Jean-Claude Juncker, the current prime ministers of Ireland, Enda Kelly, and Finland, Jyrki Katainen, and European commissioners Michel Barnier and Viviane Reding.

While it is clear that each party’s campaign in May will be led by their respective candidates, it so not so clear how the results of the election will be define a winner.  The idea that the European Council should nominate only the winner of the election depends on there being a clear winner.  If that is taken to be the candidate of the party that gets the most votes or seats (meaning either the EPP or the PES), that might be based on only 30 per cent of the popular vote.  The temptation for the European Council to try and override such an outcome could be strong.  In addition, the willingness of the other political groups in the EP to support the nomination of a candidate that, prior to the election, they themselves opposed might be weak.

A reducing ballot, in which there are successive rounds of voting with the bottom candidate dropping out each time, would force parties to work together to produce a candidate clearly supported by a majority of MEPs.  Such a candidate would command greater loyalty from the EP as a whole and be harder for the European Council to ignore.  It would also require the party groups to come together to agree a programme of legislation and other action that the nominated candidate would lead, plus there would be a team assembled of Commissioner nominees from the other party groups.  This would look rather a lot like parliamentary government.

The outstanding question is whom the ECR group would support.  Would the British Conservatives attempt to nominate their own candidate?  Would they support the Christian Democrat nominee?  Would they stand aside and take no action?  The British Labour party has declined to join in the nomination of Martin Schulz.  This exciting development of parliamentary democracy is largely passing British politics by.