Could you pass the citizenship test?

Home/Blog/Could you pass the citizenship test?

Could you pass the citizenship test? 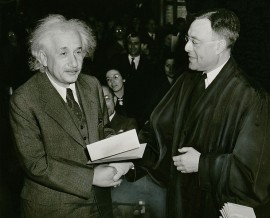 A nation, famously, is a group of people who think of themselves as a nation.  They may have other things in common – a language, a religion, a state – but those are incidental, not fundamental.  What matters is the mutual understanding among the people that they belong together.  In Benedict Anderson’s words, “an imagined political community”.

As such, this is a useful way of thinking about the sub-divisions of humanity, but a terrible way of trying to divide up territory or make laws.  Different people can imagine different things: there can be no unambiguous definition of where a nation stops and starts, who does and doesn’t belong.  Or even, if one thinks of Palestine or Kurdistan (or Cornwall), whether a nation exists at all.

The difficulty of trying to define nationhood is clearly revealed in the UK citizenship test, an updated version of which was published this week.  To become a citizen, it is necessary not merely to meet the narrow legal tests of residence or family ties, but also to fit in.  Concerns about immigration diluting national identity have led to a defence based on quiz questions.

You can see the point: citizens are also voters, and the health of democracy depends on the presence of a demos, namely a community of voters who accept the same rules and accept that under those rules they might lose out.  One of the things that holds together a demos is a sense of national identity, hence the citizenship test.

But are the questions in that test actually able to screen out those people who do not think they belong?  If not, there is no point in the test.  Those questions (see some examples here) ask about the Victorian history of female emancipation and the ethnic composition of the United Kingdom, and useful things like speed limits and how to apply for a job, but is not knowing whether there are 13, 14, 15 or 16 million children in the UK sufficient grounds for denying someone the vote?

And then there are some ideologically loaded questions.  For example:

How about the answer that the Council is a co-legislator with the European Parliament?  Maybe objecting to this strict intergovernmental portrayal of the EU makes me, as a critic, un-British.