Denis MacShane picks the wrong target on the European Parliament

Denis MacShane picks the wrong target on the European Parliament 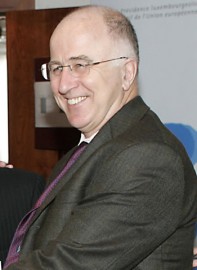 A new pamphlet by Labour MP Denis MacShane, “Europe’s parliament: Reform or perish?”, published by the Centre for European Reform, worries about the decline of public interest in the European Parliament, and explores some ways in which it might be reinvigorated.  For anyone who cares about the future of the EU, this is an important subject.

He acknowledges proposals put forward by notables such as Sir Julian Priestley and Andrew Duff for stronger European political parties, reinforcing the European dimension of national party politics or nominating candidates for a trans-national European constituency in the European elections.  But he is unconvinced.  He remarks that:

“Priestley is right in theory. But on the ground the opposite seems to be the case.”

National political parties show no sign of wanting to give up their powers and influence to European parties.  Even pro-European politicians – he cites successive Lib Dem leaders and the late Robin Cook – have ducked the challenge of making Europe more central to their domestic political positioning.  It seems that:

If this is so, what else can be done to make the European political process more relevant and popular, particularly in the eyes of members of national parliaments?

“The sense that national MPs – as guardians of sovereign democracy – are less and less in control of decisions taken in Europe and then imposed on their peoples is of growing concern.”

Denis MacShane explores some means of doing this, from what he characterises as the bottom up.  National parliamentarians should get more involved in the workings of the European Parliament – perhaps “an upper house or senate in the EP consisting of representatives from national parliaments” – and spend more time working on European issues in more effective ways.

But the same objections can be levied at Denis MacShane’s proposals as he levies at everyone else’s.  The theory is one thing, the practice quite another.

He himself concedes that:

“As it stands, the Commons appears incapable or unwilling to organise its work so that EU policy gets mature consideration, apart from the pro- and anti-EU knockabout which fills most of the debating time on Europe.”

National MPs, Denis MacShane aside, are just not that interested in the European Union.  They should be, but they are not.  And asking them to look at bits of European legislation some considerable way down the legislative track is not going, on its own, to make the difference.  If it could, it would have done by now.

In thinking about exclusion of national parliamentarians from European affairs, which is the real subject of Denis MacShane’s pamphlet despite the title that focuses on the European Parliament, the relationship that needs to be reformed is not that between the House of Commons and the EP but the one between the House of Commons and Whitehall.  It is not possible to revitalise the way the EU works without thinking about the national governments.

The most important task for national parliamentarians in the EU legislative process is to hold to account their respective national ministers for the things they say and the votes they cast in the Council of Ministers.  Everything the EP does is paralleled in the Council: that is where national parliaments should exercise their influence.  Once opposition spokespeople and backbenchers get the chance to challenge government actions in the Brussels committees, and once it falls to government backbenchers to defend them (or otherwise), then the cut and thrust of national politics will be replayed at European level.  It is that cut and thrust that is missing and that needs to be restored.

The outstanding point, therefore, is how parliament can hold the government more effectively to account.  Previous visitors to this website will find this theme familiar.  The problem of contemporary democracy is often a problem of government rather than a problem of parliament.  Parliamentarians, however, are easier to blame, as Denis MacShane must know.