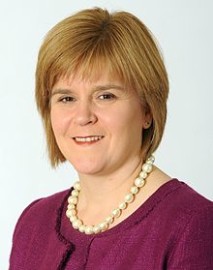 Nicola Sturgeon, first minister of Scotland – gets another chance for independence?

Interesting that the EU referendum on 23 June gives a new lease of life to the case for Scottish independence. It was Europe that was the cause of its failure two years ago.

As the argument for Scottish independence developed in recent decades, it slowly became more British. It started out as pacifist, republican and isolationist, against NATO, the monarchy and the EU. By the time of the referendum, the SNP plan was to stay in NATO, the Queen would stay on the throne, and protecting against a possible future English vote to leave the EU was put forward as a positive reason to vote for independence.

Even on TV, the plan became more British. The right of the Scottish people to watch BBC programmes such as EastEnders, Dr Who, and Strictly Come Dancing was to be preserved after independence, one way or another. When preserving cultural union with England had become an explicit goal of the SNP, it was clear that a major plank of the independence case had died.

What truly killed independence, though, was the currency. The SNP did not have a coherent plan for what to do with the pound.  Keep it?  Swap it?  Nobody really knew.

There were essentially four options.

First, share the pound with the rest of the UK (rUK). This would be the best for trade – England is by some distance Scotland’s biggest trading partner, accounting for perhaps two thirds of Scottish exports – and was the proposal backed by the Scottish government.  However, there was a big hole in the Scottish government’s plans, namely that it would require the agreement of the rUK, and that agreement was likely to require some kind of fiscal pact.

Experience of the eurozone was that countries sharing a currency had to observe mutually agreed limits on government borrowing: without such limits, there was the danger that one country would go on a borrowing binge with the costs of repayment being, in effect, shared by the others.  A Scotland that voted for independence in order to escape English austerity could hardly submit to such a fiscal pact, limiting its ability to borrow and spend.

Worse, the fiscal pact would likely be asymmetric. The rUK would have been 10 times the size of Scotland and being asked to accept a fiscal pact at Scotland’s request.  A very possible outcome of sharing the pound would have seen Scotland subject to fiscal rules limiting its budget deficit that did not apply to the rUK.  How could an independent Scotland have accepted this humiliation?

But without a fiscal pact, Scotland might have found itself using the pound as a foreign currency.  This could have been even worse.  The problem here is that the Scottish government would have been issuing debt in a currency that it did not control.  The last resort for a government in difficulties of devaluing the currency and reducing the size of its foreign debts would have been unavailable.  This is fine in the good times, but possibly a serious problem in the bad (as the Greeks have discovered).

And the bad times would have come quickly.  The rapid collapse of Scottish oil revenues that we have seen in the last year, from £1.8bn to £60m, would have blown an enormous hole in the Scottish public finances, a hole that could only have been filled by borrowing at foreign rates.  Scotland would have escaped austerity imposed by the English only to impose something even more severe upon itself.

The third option was to create a new separate Scottish currency. If there is to be a separate Scottish army or set of embassies, why not a Scottish pound?  This option instantly creates a difficulty: it is a continuing theme of this website that fluctuating exchange rates are an obstacle to trade (imagine if the foot varied in length against the metre).  For Scotland to have a different currency from England would introduce a major new cost into the Scottish economy.

Furthermore, a country that borrows in its own currency can devalue that currency and reduce the size of its debts that it has to repay.  International markets are aware of this threat and will charge a higher interest rate to account for the risk of what is effectively a partial default.  A country that gets into difficulties will see the risk premium on its borrowing rise, which will plunge it into further difficulties, so its risk premium rises still further, and so on.  That way lies national bankruptcy (again, as the Greeks have discovered).

The fourth option is of course to join the euro.  It creates a trade barrier with England, but a smaller one than an independent Scottish currency poses because it at least means a common currency and fixed exchange rate with the eurozone.  The EU currently represents around 15% of Scottish exports.  To join the euro would imply joining a fiscal pact, but a fiscal pact shared by the whole of Europe and not one imposed by the English.  It would also imply issuing debt in a currency that mimics a foreign currency, which we noted previously has been the Greek problem.   But there are plenty of countries in the eurozone that issue such debt without difficulty: the problem is Greece, not the currency.

Of course, the euro was not popular in Britain, but the SNP needed to make the case.  The economic and constitutional problems posed by options 1, 2 and 3 were surely insuperable for a newly-independent Scotland.  It could not have voted for independence, only to subject itself to an asymmetric relationship with the rUK again, and would have risked crashing very quickly with a currency of its own.

The whole point of the EU is to make life easier for small countries.  They preserve their independence in some ways, sharing powers and interests in others.  The sharing is based on a mutual polling of sovereignty and not on the unilateral cession of power.  The case for Scottish independence only made sense in the context of a uniting Europe, but the independence campaigners could not quite bring themselves to do it.

English euroscepticism has given them another chance.  Maybe this time they will take it.