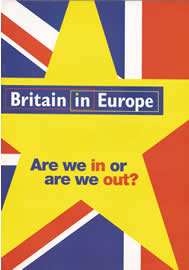 Are we in or are we out? published by Britain in Europe

At an event to analyse the implications of the Brexit vote and try to predict what comes next. One question from the audience – what was the biggest lie told during the referendum campaign?

There was general consensus among the panel that £350 million for the NHS was the worst thing said, with maybe the imminence of Turkish accession a close second. Both shameful, both knowingly false, both aimed at weak points in the Remain case.

But a lie has been told by the Remain side, not during the campaign particularly but for the preceding 20 years. We were told repeatedly that it was possible to be half in the European Union.

We could benefit from the single market while complaining about the rules. We could rely on the rule of law while objecting to unelected foreign judges. We could take part in the political institutions without respecting the politicians themselves.

All of that we were told: none of it was true.

Everyone wants to eat in the nicest restaurants and have someone else pick up the bill. It’s a childish illusion, not fit for a democracy in the 21st century. In the end, the meal has to be paid for.

The central argument of the initial Britain in Europe campaign in 1999, before New Labour got involved, was that membership of the EU without joining the euro would prove to be unsustainable. And so, I’m afraid, it has proved.