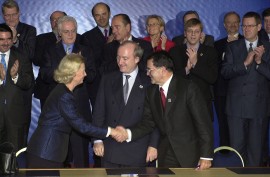 Signature of the Charter of Fundamental Rights, Nice European Council, 07-08/12/2000

The Cologne Summit in June 1999 decided that “the fundamental rights at Union level should be consolidated in a Charter and thereby made more evident”. The Charter should contain [a] the “fundamental rights & freedoms as well as basic procedural rights guaranteed by the European Convention on Human Rights” [b]”fundamental rights that pertain only to the Union’s citizens”, and [c]”economic & social rights as contained in the European Social Charter and the Community Charter of the Fundamental Social Rights of Workers [TEC Art.136]. insofar as they do not merely establish objectives for action by the Union”. It was noted that the statement makes no reference mention of duties or obligations, although TEC Art. 17.2 on EU citizenship includes such a reference.

In a change from the EU’s normal practice to date, the task of drafting the Charter was given to a committee [now called the “Convention”] made up of representatives of member states’ governments, national parliaments, the European Parliament, and the Commission, together with observers from the European Court of Justice. The Convention is chaired by Roman Herzog, formerly President of Germany and President of the German Constitutional Court, and its work is to be completed by the end of 2000.

The European Council has suggested that the final Draft must he “subscribed to by all parties” which would imply a requirement for Council unanimity and ratification by European and all national parliaments.

Reactions to the proposed Charter vary. Doubters claim it to he unnecessary as EU rights are Treaty-based and therefore already justiciable. Moreover, it poses the risk of overlap and confusion between the spheres of competence of the Court of Human Rights and the Court of Justice. Supporters, on the other hand, welcome the Charter as a means of promoting a “citizen’s Europe”, pointing out that public ignorance of rights enshrined in the Treaties and ensuing legislation is one cause of scepticism about the European project. Some claim that even the drafting process itself will stimulate public interest-though there has been little press coverage of the two meetings held so far. Collating existing rights could also highlight how much is missing. Despite the tight timescale and potential ratification problems [e.g. Council unanimity] many NGOs are already proposing the inclusion of “new” rights.

Whether or not the Cologne Summit intended the proposed Charter to have legal force – i.e. to be justiciable – seems unclear. The UK government takes the minimalist view that it should be declaratory, though indicating where the relevant legislation is to be found. A more widely held view among NGOs, is that the Charter should itself be justiciable and that it should be incorporated into the next Treaty revisions to be agreed at this year’s IGC. As a corollary, access to justice for individual plaintiffs needs to be made easier than at present, and swifter.

Queries were raised in the discussion concerning how the harmonisation of rights relates to the commitment to cultural diversity or to subsidiarity. The legal systems of member states and range of available rights are not uniform. The differing attitudes in France and Britain towards privacy laws are one example. Diverse traditions may lead to differing concepts, at least in the popular mind, of what constitutes a “right”. In addition to rights guaranteed by law some legal traditions also recognise a person’s right to do anything not expressly forbidden. Other examples are possible. The key question is how to achieve a common code of rights while simultaneously respecting national traditions and the subsidiarity principle.

The European Convention on Human Rights [ECHRJ has so far been the most successful internationally binding charter of its kind. Its provisions aim to protect the rights not only of subscribing states’ citizens hut of all persons within their jurisdiction. In all signatory states, including all EU member states, the rights listed in the ECHR are already justiciable. with right of appeal to the European Court of Human Rights. In respect of actions by the EU’s own institutions these same rights are now justiciable before the Court of Justice under Article 469(d) of the European Community Treaty [TECJ, though this provision needs amending to extend protection to cover all the Union’s activities. Moreover, unlike its member states the EU itself is not a member of the Council of Europe nor a signatory to its conventions. It is not suggested that the EU itself should become a member of the Council of Europe hut merely that it should become a High Contracting Party to the ECHR. For this purpose a Treaty amendment endowing the EU with the necessary legal personality [see Court of Justice Opinion 2/94J is needed to enable it to sign and ratify the ECHR and its protocols. To avoid confusion of competences between the Court of Justice and the Court of Human Rights a special agreement would need to he negotiated, including recognition of the primacy of Strasbourg in Human Rights questions.

Certain justiciable Treaty-based rights are available to all persons within EU jurisdiction, regardless of whether or not they are member states’ nationals. They include the right not to suffer discrimination on grounds of race, religion, age, handicap, etc.[TEC Art.13], the right to petition the European Parliament [TEC Art.194], to seek help from the Ombudsman [TEC Art.195], equal treatment of men and women in respect of economic activities [TEC Art.141], and most other specific economic and social rights [TEC Art. 196}, though despite the abolition of border controls between most member states the right of workers to move and reside freely anywhere in the EU is confined to EU citizens only [TEC Art.39].

All nationals of member states are also citizens of the European Union. EU citizenship is not a nationality. It complements hut does not replace national citizenship [TEC Art.17]. It can best be described as an entitlement to certain rights including in addition to the right to move and reside freely anywhere in the EU [TEC Art.39] – a limited range electoral and diplomatic rights [TEC Arts.17-22] over and above those rights already mentioned in the previous paragraphs which are shared by everyone resident within the Union’s borders.

The basis for EU citizenship needs re-examination. An estimated 14 million third country nationals (including non-British Commonwealth citizens resident in the UK who enjoy full UK political rights but are not entitled to EU citizenship rights such as freedom of movement) live and work in the various member states. Only by acquiring the nationality of their member state of residence can they at present become EU citizens. This process is often fraught with difficulties, not least because of the wide spectrum of regulations in the different member states. It has been proposed that third country nationals legally resident in an EU member state should be entitled to “residents’ rights” which would bring them in line with those of EU citizens. This Forum considered that a better way forward would be to establish a mechanism by which, under agreed conditions and after a qualifying period, third country nationals could apply for the status of EU citizen on the basis of residence rather than nationality. This would entitle them to enjoy the same rights as other EU citizens living in a member state of which they are not nationals. Such a move would aid the process of integration while at the same time helping to foster a rights-orientated rather than ethnic or nation-based sense of European identity.

The Forum made no attempt to produce its own detailed catalogue of rights though a few suggestions from other sources were discussed. It was felt that the Charter should distinguish between two categories of rights specific, such as the “right to join a trade union”; and general principles, such as “right to work”. Doubts were raised about whether, in practice, general principles could be justiciable, particularly-as in the case of the right to work-as they raise issues which are more properly the subject of political debate. There are areas however where these two categories overlap. For example, on the “right to life” [ECHR Art.2] a question was raised concerning abortion; and also whether conscription for military or civilian service contravened the ban on forced labour [ECHR Art.4].

Specific rights must clearly be justiciable. Under this heading the range of topics is very wide and more detailed discussions will be necessary once the draft Charter is published. In a brief survey of likely elements particular emphasis was placed on children’s rights and a ban on child labour to be included in the Charter. There was agreement on the importance of a right to challenge the legality of administrative acts and demand judicial review, and the need to extend EU citizens’ right to vote in their country of residence to include regional and national as well as local and European elections.

In addition, the Charter must lay down the democratic procedures by which it may, if necessary, be revised or amended at a future date.

As stated earlier in this report, the Federal Union Policy Forum’s discussions concentrated on the underlying principles of an EU Charter of Fundamental Rights and looked only sketchily at the details of the rights themselves. The importance of the Charter in the development of the European Union was clearly recognised.

Based on the values of “liberty, democracy, respect for human rights and fundamental freedoms, and the rule of law, principles which are common to the member states” [TEU Art.6.1], the Charter will constitute a guarantee of agreed democratic standards for everyone, citizens and non-citizens alike, living within the EU’s borders. It will be, in effect, the European Union Bill of Rights.

To ensure recognition of this status the Charter should be included in the treaty following the present Inter-Governmental Conference. The democratic procedure used to draft this Charter also provides a model for drawing up a constitution of the European Union of which the Charter should form part.