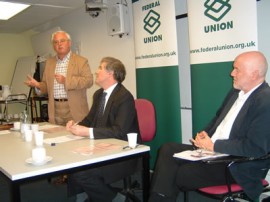 After 43 years of separate existence, Federal Union, the UK section of the UEF, finally reunited with its world federalist equivalent, the Association of World Federalists. The AWF had been founded by members of Federal Union back in 1965. Negotiations over the reunification had been going on all summer, and their culmination was a meeting held in London on Saturday 6 September at which the reunification was agreed (with only one dissenting voice).

The day opened with a seminar addressed by Michael Burgess, professor of federal studies at the University of Kent, and Keith Best, chair of the AWF Council and of the WFM Executive Committee. Michael Burgess outlined the values and principles that underlay the federal idea and identified three areas where there had been a distinctive British contribution: the Philadelphia convention; devolution in the United Kingdom; and its influence on the thinking of Altiero Spinelli. Keith Best warned that it was easy to think that every development in global governance was a form of federalism, when often they are not. That is why those that unmistakeably are, such as the International Criminal Court, were so valuable.

The political debate was followed by a business session in which the terms of the reunification were agreed. The statutes of the new organisation are based on the former statutes of Federal Union, although with specific posts for Deputy Chairs to make sure that neither European nor world federalism is neglected in the future workplan. Elections for a new committee will be held at an AGM in March 2009: until then, the organisation will be led by a committee composed of all the existing members of the two previous committees. The organisation will preserve the name Federal Union, which it first adopted in 1938, and will be a member organisation of both the UEF and the WFM.

Finally, the workplan will focus on federalism at UK, European and global levels, with a particular interest in issues where different levels overlap. For example, there cannot be a serious attempt to manage the global economy unless the eurozone has more effective arrangements for external representation. The political logic behind this realisation has been a major factor in bringing the European and world federalists back together again.