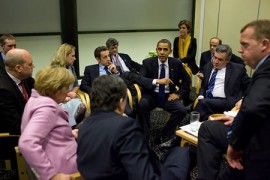 Two events compete with each other to be the most important achievement of 2009. Each in its own way is a little underwhelming, but each might turn out to carry immense significance. Time will tell.

The first is the passage into law of the Lisbon treaty. Eight years in the making, the treaty has been through an unprecedented series of discussions, referendums and rewrites. The decisions about the process of creating a new treaty, from appointing Giscard D’Estaing as chair of the convention onwards, have almost always been bad ones, but nevertheless we have a treaty. The future success and development of the European Union depends on the implementation of Lisbon and its ability to bring more order and effectiveness to European decision-making. And that order and effectiveness is sorely needed.

The European elections in June saw a modest victory for the centre-right, but not on such a scale as to make a substantial difference to the political direction of the Union. The British Conservatives marched out of the major party groupings in the European Parliament just as parties such as Ireland’s Fianna Fail and the Italian National Alliance saw that those groupings were where the power lay: the old UEN group has been replaced by the new ECR group and the overall balance of power in the EP will remain unchanged.

More seriously, the election of the president of the Commission was a one horse race. For all their bluster, the Socialists declined to put up a candidate to rival Jose Manuel Barroso, and their complaints about his policies and record accordingly ring a little hollow. In fact, the British Conservatives supported Mr Barroso’s re-election, so their posturing in opposition to what they claim to be the tide of European over-centralisation is even more hollow.

The other elections, for the president of the European Council and the High Representative for Foreign Policy, attracted more attention but deserved less. The choice of Commission president will make far more difference to the political agenda of the European Union than the choice of Council president can do, but the news media has yet to understand this important fact. Perhaps the political parties should have made more of an issue of this in the elections in June: a lot rests on the way that Europe acts in the future.

This is shown clearly by the second important event of 2009, namely the Copenhagen summit on climate change. Again, the outcome of the summit is less than climate campaigners had hoped, but again maybe some seeds of progress have been sown.

These seeds lie not so much in the decisions that were reached but in the way that they were reached. A group of countries hatched a deal that was presented on a take it or leave it basis to the rest of the world: so far, so normal. The significance for the future lay in the group of countries involved: the United States, of course, plus China, India, South Africa and Brazil. Europeans were involved in writing the draft but not in settling the final wording. The shifting balance of power in the world is laid out for all to see. The European Union needs a better way of expressing itself in the world if its interests and values are to be there in the debates. Until they can agree on a common representation, they will go unrepresented.

Whether Copenhagen will turn out to be significant rests also on the content of the agreement. Is it possible that the world will look back and see that a new approach to managing global resources has been born? Personally, I doubt it: the changes needed are more far-reaching and will come gradually rather than in one defining moment, but that is no reason to be too pessimistic.

It would be wrong to indulge in too much pessimism on the British political scene, either. The previous prospect of a Conservative government taking office, not on the strength of its European views but as a result of the economic crisis, but proceeding nevertheless to take Britain out of the European Union has receded. Partly this is because the opinion polls do not give the Tories the lead that the state of the economy might have led them to expect, but mainly because the Conservatives themselves are keeping their opposition to the EU in some kind of check.

David Cameron has rejected the prospect of a referendum on Europe in his first term in government, should he win the general election next year. The price of this has been to increase the Eurosceptic expectation of a referendum in his second term, but there is much in both British and European politics that might happen before then.

On the domestic political front, there has been little progress this year in constitutional reform at Westminster. The Labour government has spoken some more about completing the exclusion of non-elected members from the House of Lords, but their intentions are rather desultory given that this was in their election manifesto when they were first elected 13 years ago. For all their apparent reforming zeal, it is clear that New Labour’s heart never really was in constitutional reform. The attractions of centralised control were too strong. The Conservatives and Liberal Democrats are talking about decentralisation and localism in various forms, but they too will need to overcome the exhilaration of power in order to decentralise and localise.

It follows, then, that the only serious challenge to the British constitutional order comes from political parties that would gain power, and not lose it, as a result. The Scottish government has published its proposals for a referendum on more devolution and independence next year, and in Wales, too, there are now plans for a referendum on more devolution. The challenge to the Westminster system comes not from within but from outside. Will the United Kingdom be able to adapt to this new dimension to politics, or will it be broken up by it?

Perhaps this is the theme for the coming year. The pressure for change in the political systems based in Westminster and Brussels comes not from within but from outside, from Edinburgh and Cardiff, from Beijing and New Delhi. Will the UK and the EU be ready to cope?