How do you solve a problem like Radio Maria

How do you solve a problem like Radio Maria 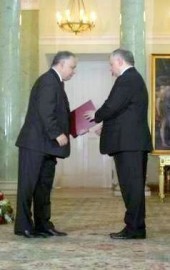 Polish President Lech Kaczyński (left) nominating his brother, Jarosław Kaczyński, as prime minister of Poland (picture Archive of the Chancellery of the President of the Republic of Poland)

The European Council meeting later this week is one for the connoisseur. Not only do we have a big issue at stake – the future of the constitutional treaty– we also have major uncertainty about the possibility of agreement among the member states.

The French position is clarified now that Nicolas Sarkozy has been elected president, but the British continue their tradition of turning up at the summit to defend their “red lines”. (This from a country that accused others of exercising an “unreasonable veto”!)

Better still, from the bystanders’ point of view, is the Polish government. They have truly taken over from the British as Europe’s awkward partner. While they will not turn up at the summit with a long list of things to complain about, the single issue they have chosen is one that divides them from all the other member states.

Read the whole article at 070619euobserver