How much harm can one man do?

Home/Blog, Featured Articles Top, Quotebank/How much harm can one man do?

How much harm can one man do? 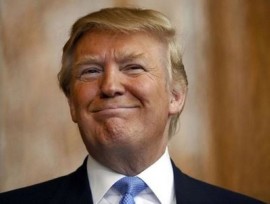 Donald Trump defeating Hillary Clinton wasn’t the result most of us wanted or expected, but it’s what we’ve got. The question now is what next?

Trump’s promises on the campaign trail were variously bombastic and implausible. He couldn’t keep them all, even if they were worth keeping, and many of them are not.

The parallel with Britain’s EU referendum is striking. A set of mutually incompatible demands and half-truths is no basis on which to chart the future of a country. The rest of the world looks on mystified, wondering who can make sense of all this.

And maybe that’s where there’s a glimmer of hope, the notion of who.

When it comes to Britain leaving the EU, we are taking a decision for a generation. Our constitution will be torn apart, our integration into the global economy dismantled, our citizens deprived of fundamental rights. We have a constitutional revolution but nobody to be held to account.  The prime minister was officially a Remain campaigner, in a modest sort of way, pledged now to make a success of a policy she opposed.  Many of the other Leave leaders are now scattered, and the rest will scatter soon.  If life outside the EU is worse than life inside, there will be nobody to blame.

With Donald Trump, though, it is not the constitution that might be ripped up but the government.  All kinds of awful things might follow from Trump policies, or what follows after Trump policies have failed, but there will be someone responsible.

When John Adams wrote of

a government of laws, and not of men