How to make a referendum on Europe fair

Home/Blog/How to make a referendum on Europe fair

How to make a referendum on Europe fair 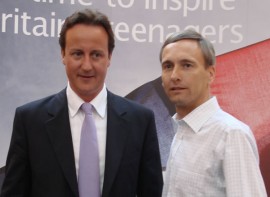 There is a debate in the House of Commons this afternoon on whether to hold a referendum on EU membership, called by the eurosceptics who, of course, want Britain to leave.  The motion in the House of Commons is non-binding, but nevertheless is an opportunity to take the temperature of British political opinion.  The thermometer is affected, though, by the three line whip that all three major parties have imposed on this debate: what might have been an occasion for backbenchers to give voice to the concerns raised by their constituents has been turned into a story about party management.

This website opposes the idea of a referendum on EU membership at this time, for reasons set out here and here.  But there is more to the motion than just membership.  It also proposes that there should be a third option for the public to vote on, namely negotiations to repatriate some powers but retaining membership.  This third option has caused some confusion on the eurosceptic side, over whether this third option is a good idea or not.

The reason why it might be a good idea comes from behavioural psychology.  The relative preference people have between two options is different if they are also presented with a third option.  For example, consumer preference for one type of beer rather than another is different if there is a third beer also available.  To put forward a “renegotiate” option will appeal to eurosceptic voters who are afraid of leaving the EU altogether.  (A criticism made by pro-Europeans is that the claims made for renegotiation are unrealisable, e.g. the House of Commons can be given full powers over all EU laws, in which case public fervour is whipped up on the basis of some deceit.)

An argument against is that it would split the eurosceptic vote.  What if the votes cast were as follows:

There would be a clear majority for change of some sort, yet a FPTP result would, to the dismay of the eurosceptics, confirm the status quo.  (That this is an argument put forward by people who preferred FPTP to AV in the electoral reform referendum is something we will skip lightly over.)

On the other hand, it is easy to swap the numbers around to come up with this:

In which case Britain leaves the EU on a minority vote.

The electoral point is easily addressed, however.  The referendum held in Scotland in 1997 on creating the Scottish parliament asked two separate but related questions:

That way, the two types of eurosceptic could combine to vote Yes to the second question, while dividing in voting on the first one.  Organisationally, the eurosceptics would be split, but they would be spared the risks posed by the mathematics.

The observant reader will ask why, if the point of the referendum is to give the public a voice in Europe denied them in general elections where other issues predominate, there is no pro-European option on the table.  Why not a third question, mandating the government to negotiate for a more democratic, transparent and accountable set of institutions for the European Union?  It would be only fair.

The effect of a third choice on the previous two choices, that I mentioned earlier, is described by Rory Sutherland in his lecture for the British Brands Group as follows:

Mountainview, a company that studies behavioural economics, has researched relative price effects. The example below shows the impact on sales of Carling and Budweiser at a specific price point, depending on three scenarios – whether they are sold together, with a 30p Tesco value lager or with a £4 bottle of Kronenbourg. The differences in the number of people buying either Carling or Budweiser depending on what they are sold with demonstrate comparative effects. Also demonstrated is the draw towards the one in the middle.