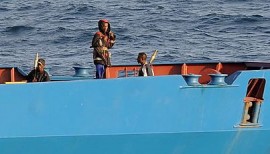 This blog has written before about the spate of piracy in the seas off the coast of Somalia. Ships are being taken hostage and ransomed back to their owners; the same is true of passengers on smaller craft.

The limits of the law are exposed in these dangerous waters. They are a place where normal rules do not apply. There is no police force to enforce the law; ships are dependent on the intervention of ships from the world’s navies, who may or may not be ready to help.

The law that applies differs according to the nationality of enforcers. The French, it is reported, have taken Somali pirates prisoner and taken them back to France for trial. The British, on the other hand, are reputed to let their captured pirates go for fear of their bringing cases under the Human Rights Act.

Added to this we now have reports of different approaches towards freeing the hostages. Some countries are willing to negotiate with the pirates for the release of their citizens held captive. The British policy is to refuse to do so. This policy has been criticised by some of the private security companies working in the region.

The British refusal to negotiate or pay ransoms is intended to deter the taking of hostages in the first place: there is no point if there is nothing to be gained from it. However, as long as any countries are willing to meet ransom demands, it is worth the pirates’ while. They can have little idea what the nationality of the crew of a small boat will be, and that crew might be from a country that will pay up. British hostages might be captured by, in effect, mistake.

The British approach may be, in principle, the best one, but it will only work if every country follows it. As long as there is a possible reward for hostage taking, Somali pirates will continue to try. And the international community lacks the ability definitely to rule out the possibility of paying up.