Is there a difference between a constitutional change and an international treaty?

Home/Blog/Is there a difference between a constitutional change and an international treaty?

Is there a difference between a constitutional change and an international treaty? 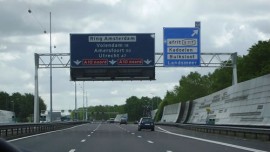 Building a motorway is an irreversible decision (picture Purka)

At the debate last week, I was asked the interesting question of whether there should be a difference in the treatment of a purely domestic constitutional reform and an international treaty that had constitutional implications. This follows on from Argument 1 in the talk I gave, which was that there are many constitutional issues on which eurosceptics have not proposed referendums, so why should they suddenly treat the Lisbon treaty as different.

I replied from the standpoint of an advocate of Argument 1, and said that there was not. Like a domestic constitutional reform, an international treaty can be renounced. The UK has signed the European treaties and joined the EU: equally, it could renounce those treaties and leave again. The EU is fundamentally a union of consent.

Now, it is true that the UK could not necessarily undo the Treaty of Lisbon, were it to come into force, and go back to being in the EU of the Treaty of Nice, but that is not an indication of the seriousness of the Lisbon treaty. Rather, it is because the Lisbon treaty is a mutual agreement between 27 different countries. Whether one can return to the Europe of Nice depends on the agreement of the other 26 and not just us. Similarly, the continuation of the Europe of Lisbon depends on the continued agreement of the other 26 countries: we cannot compel them to do so. The Union is a union of consent for them, too.

As to the notion that no parliament can bind its successor, that was intoned by some people at the conference as though it were true. Of course it isn’t. Go down to the M25 and see how one parliament has voted to destroy farmland and woodland in the name of better transport. No subsequent parliament can put that back. Similarly, every parliament is now bound by the decision of previous parliaments to run a nuclear power programme: the waste will be with us for thousands of years. It would be easier to get out of the EU than to dispose of nuclear waste, even if our self-appointed constitutional theorists refuse to see it.