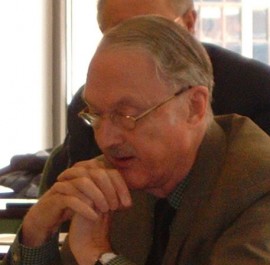 John Pinder OBE was that rare thing: an intellectual leader in politics. A résumé of his career speaks for itself: after maths and economics at Cambridge – at King’s College, that of Alan Turing and Maynard Keynes – he joined up to the Royal Artillery in 1943 and evermore kept that style of a military officer, smart, upright, patriotic and moustachioed. Like a lot of his generation, the experience of war against fascism settled his trajectory. His first civilian job was as press officer to Federal Union (1950‐52), at that stage an influential political force not only among those who were smartly engaged in constructing post‐War Europe but also with those hard‐pressed in managing the gradual but decisive closure of the British Empire.(1) John’s father was a professional soldier, for a time commanding the army in the North West Frontier (Waziristan), and his family had business interests in Indian trams and railways: making India run on time gave his son a lasting affection for travel, foreign languages and punctuality.

From 1952, Pinder joined the Economist Intelligence Unit where with others he continued to develop the hard and fast case for British membership of the European Communities. From 1964 to 1985 he was Director of the leading social science think‐tank in London, Political and Economic Planning (PEP) – subsequently renamed the Policy Studies Institute (PSI). The list of publications he authored or oversaw, and the quality of those he employed is impressive by any standards. A Pinder network grew of scholars, journalists, civil servants and politicians (of all parties) who were committed in the best sense to the goals of social justice, economic growth, democratic deepening and internationalism.

The Pinder network, of course, did not stop at Dover. He drew especially close to the Movimento Federalista Europeo (MFE). With Jacques Vandamme he co‐founded the Trans‐European Policy Studies Association (TEPSA) in 1974, and kept up a busy schedule of teaching as Professor at the College of Europe in Bruges for thirty years (where so many of Europe’s political class sat at his feet). He served as President of the Union of European Federalists (UEF), which he loved, from 1984‐90 (the Thatcher years); and he was always as active as could be in the service of the European Movement both in the UK and internationally. Few invitations to speak or write were declined, and engagements accepted were fulfilled conscientiously.

From 1985 to 2008, John Pinder was the Chairman of the Federal Trust for Education and Research, founded by William Beveridge in 1945. Although always shy and self‐effacing, John was also soldierly bold. He would never hesitate in calling on friends in high places – such as Roy Jenkins, Edward Heath, Altiero Spinelli and even Valéry Giscard d’Estaing – especially when he deemed them (all too often) to be lacking in zeal or consistency for the European cause. His own high standards led him to expect much of others.

John Pinder was a brilliant editor of others’ works, as well as a kindly but critical mentor of those younger whom he recruited to work alongside him. His lengthy bibliography very well illustrates the rich breadth of his intellect and politics: economist, politologue, environmentalist, historian, teacher, benefactor. And we are truly fortunate that after his death on 7 March at the age of 90 his writing and example are still with us ‐ liberal, continuing and humane.

He was a very good writer, tackling complex subjects with scruple and without condescension. (2) Here he is on the Treaty of Maastricht:‐

‘The question at issue is whether the powers [of the European Union] are to be exercised in common by an intergovernmental system, which is both inefficient and undemocratic, or by an effective system which respects the principles of democratic government, with the rule of law based on fundamental rights and with properly representative government under which representatives of the people – together with, in federal systems, the representatives of the states – enact the laws and control the executive. This system is based on British, more than on any other, political philosophy. It is very sad that British governments should oppose its application to the European Union where interdependence renders a new level of government necessary.’

Pinder strongly promoted the EU’s enlargement to the east as well as its democratic reinforcement. He was one of the first to advocate the holding of a European constitutional convention.

‘Such a procedure is a novelty for the British. Our constitution has developed in a different way. But the exercise of political power in common with our neighbours to deal with the problems of mutual interdependence has reached a point where a constitution will be needed to ensure that it is properly controlled; and the need will become more acute as the number and diversity of member states increases. The European constitution cannot evolve over the centuries as the British one did. Nor should it be allowed to develop much further by the methods employed to negotiate the Maastricht Treaty. The Treaty is a positive achievement. But it is confusing and obscure and it has not carried the people with it.

Europeans need an effective Union with a democratic structure, which must be established in a way that can secure the consent of the citizens. … Only thus can Europeans provide for the security, prosperity and environment that they should have in the intensely interdependent Europe of the twenty‐first century.’ (3)

In Who’s Who, John recorded his interests as ‘music, walking, foreign languages and literature’. His holidays with Pauline walking in France and Italy never ceased to rejuvenate him. We can picture him thoughtfully trudging on, in high spirits like a pilgrim, with stubborn perseverance towards a destination becoming ever clearer and nearer.