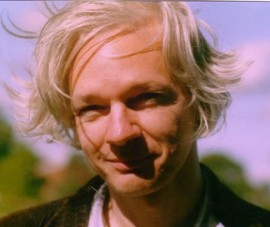 It is wrong that national borders should be used as a means of evading criminal justice.  No bank robber escaped to the Costa del Crime should think that crossing a border is protection from the consequences.

Federalists supported the European Arrest Warrant (EAW), for example, as a way of rebalancing the idea of free movement within the single market to ensure that victims of crime were not further disadvantaged by its perpetrators.  If someone could flee readily across a border after committing a crime, they must be returned readily to face justice.  The long-standing practice of extradition treated this return as a judicial matter, requiring potentially protracted court cases of its own.  The EAW turns it into a matter of police cooperation, aiming for speed: justice delayed is justice denied, after all.

In this light, what to make of Julian Assange, holed up in the Ecuadorean embassy inLondon?

He is wanted on suspicion of having committed sex offences in Sweden and, having fought and lost against an EAW all the way to the Supreme Court in the UK, has sought and gained political asylum from the government of Ecuador.  The embassy is now surrounded by the Metropolitan police 24 hours a day, on the chance that Julian Assange might make a run for it.  His fear of arrest and transfer keeps him confined to a room in an office with only a treadmill and an internet connection for company.

Julian Assange apparently claims that he is not unwilling to face the charges in Sweden, which he denies, but that he fears extradition from Sweden to the United States to face prosecution there for offences allegedly committed as part of the Wikileaks project.  To avoid that second extradition, he has no choice, he says, but to seek protection somewhere else. Ecuador has offered that protection, which is why he has ended up in a small room in Knightsbridge.

The British government has (1) rightly said that Julian Assange should go to Sweden for trial but (2) clumsily threatened the Ecuadorian embassy with closure.  Naturally, this threat has only provoked and entrenched the Ecuadorian position: “we are not a British colony”.  (Read Sir Brian Barder on the subject here.)

It has been wisely pointed out by David Allen Green that Julian Assange is at no greater risk of extradition to the US from Sweden than he is from Britain: the same legal protections under the Lisbon treaty and the ECHR apply in both countries; to be extradited from Sweden having arrived there under and EAW from another EU member state requires the approval of that member state too; and the British extradition treaty with the US is notoriously ready to accede to requests.

The suggestion that the allegations of sex offences in Sweden are part of a conspiracy to get Julian Assange from Britain to America has to overcome a series of obstacles if it is to be credible: why not seek his extradition directly from the UK?  Until the allegations in Sweden were made, Julian Assange was hoping to live in that country anyway.  If the Americans really are as ruthless as Assange’s supporters allege, in view of the exposure of the practice of extraordinary rendition to which Wikileaks has contributed, why did they not simply kidnap him while he was out on bail in Norfolk?

There may be a good answer to these questions, but I have yet to read them (and I have read a lot of defences of Assange in the newspapers and on the web in recent days).

The main point put forward on his behalf is that he is ready to face those allegations in Sweden – of course he is, perish the thought of any doubts – but only if he is guaranteed not to be extradited to America.  What could be fairer?  But it is legally and logically impossible for a court to dismiss an extradition request, or any other petition, before it has been served – who knows what it might say?  Either his supporters know this and are disingenuous, or they do not know this, in which case they have no business commenting on the legal position at all.

And that is what is behind Julian Assange’s actions. That he is accused of sex offences is crucial.

He has positioned himself as a representative of the oppressed, revealing the unworthy secrets of the powerful to the world.  But the story of his behaviour in Sweden reveals, if true, that he is, in the eyes of the female half of humanity, one of the oppressors himself, with unworthy secrets of his own.  Formerly a hero, he will end up exposed as just another man who thought that power meant he did not have to keep it in his pants.

Going on trial in Sweden risks not only a jail sentence but also humiliation; he would not be a martyr for his cause but rather a traitor to it.  Hide in a London flat, flee to South America, anything but that.