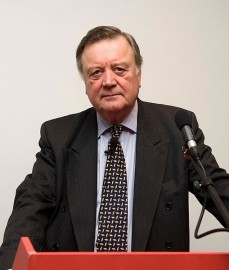 Another twist in the saga of how to reconcile English governance to Scottish devolution has been proposed by Tory MP Ken Clarke. The problem is that Scottish MPs can vote on English domestic policies (health, education, etc) but English MPs cannot vote on the equivalent policies in Scotland, because they are reserved for the devolved Scottish Parliament. This is unfair on the English, so we are told.

The current Conservative policy appears to be one of English votes for English laws: Scottish MPs would be disqualified from voting on bills which applied to England only. They would still vote, of course, on UK-wide legislation, but the English MPs in the House of Commons would in effect form an English parliament for certain matters.

The problem with this proposal is that it could lead to minority government in England. Imagine a situation where a government had a majority in the House of Commons as a whole but not among the English MPs alone. (Not that hard to imagine: a swing of 2 per cent from Labour to Conservative would be enough.) It would be able to propose legislation on domestic issues but would be unable to get it through. It would be in office but not in power.

Ken Clarke’s proposal is that the distinction between England-only and UK-wide bills should be made only at the committee stage, where the detail is discussed, and not in the second and third readings, where the issue is the principle of the bill. It would leave a government broadly able to get its legislation through the House of Commons, but forced to take greater account of English concerns as voiced by MPs.

As such, it is a compromise between the idea of an English parliament and the status quo. Like all compromises, it lacks theoretical neatness, but that only serves to make it fit more closely with the British constitutional tradition. It feels like a temporary arrangement rather than a permanent solution, but many features of the British constitution are temporary but have yet to lapse.

The only long-term arrangement that makes any sense and is consistent with keeping the union between England and Scotland intact is regional devolution within England and a federated United Kingdom as a whole. However, the English have so far proved resistant to the charms of regional devolution as championed by John Prescott (or maybe just to the charms of John Prescott himself) and until that changes, a temporary compromise has its attractions.

¤ ¤ ¤
Incidentally, if you search for Ken Clarke on Google, the first thing you come up with is “Ken Clarke’s principal interests are jazz, birdwatching, reading political history and watching most kinds of sport (he is a big fan of Nottingham Forest).” This may go some way to explaining why he never became leader of the Conservative party.