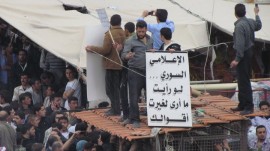 The placard reads "Syrian media... If you see what I've seen, you would change what you said!", Damascus, April 2011 (picture syriana2011 / Flickr)

This blog warned earlier in the year about the stretching of the UN Security Council resolution on Libya, 1973, that authorised a no-fly zone and led to regime change.  Was this what Russia and China (not to mention India and Brazil) all abstained over?  Would there have been vetoes if the end goal of the military action had been expressed more clearly?  Very likely.

And now, what is the UN doing about Syria?  The situation there is bad and getting worse – approaching Libyan-style civil war, according to some reports – but the UN can do nothing.  Russia and China are vetoing any proposal, even economic sanctions.

On Libya, Russia and China were persuaded to abstain on the Security Council vote after they were reassured that the Nato mission would be limited to a humanitarian intervention. Consequently they feel cheated, and refuse to countenance any resolution on Syria, with the result that the Syrian people are now paying the price for the folly of the Libyan enterprise.

I hesitate to agree with the word “folly”, but the looseness of the legal preparation for the Libyan operation has its consequences, in other countries that need help if not in Libya itself.