Moving to an elected House of Lords

Home/UK/Moving to an elected House of Lords

Moving to an elected House of Lords 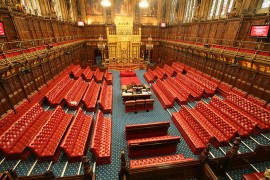 The event was chaired by Jonathan Freedland of The Guardian, and Polly Toynbee, Peter Facey and Meg Russell were the members of the Panel. Jack Straw, the Justice Secretary, was the guest speaker.

Jack Straw confessed that he had changed his views on reforming the House of Lords over the past ten years, having voted against setting up a Royal Commission at one time. He outlined plans leading to an elected “Second Chamber” (A preferred title in place of “House of Lords”), which should take 12 to 15 years and result in a Chamber with about 80% elected members. The remaining 20% could be made with such members as bishops, with a possibility for including representatives of other faiths. The elections will be staggered, so that about a third will be replaced by newly elected members coinciding with every general election and the maximum term of office for a member would be the equivalent to three parliaments.

Jack Shaw defended the slowness of the procedure that would require introduction of a complex electoral system and he stressed his preference for arriving at a consensus and not endangering the prospects of an elected Chamber. He felt that the percentage, 80% or 100%, was not really relevant, as long as the process continued in the manner he preferred, and that the decisions on election process, first-past-the-post or proportional representation, could be made in due course.

Polly Toynbee remarked that the Labour move was possibly a way to wrong-foot the Tories, with the next general election in mind. With inclusion of the reform in the Labour Manifesto, Tories could be portrayed as non-progressive if they do not favour the proposals. She said that, if Labour do mean it, they could do something straight away instead of waiting for any consensus.

Jack Straw recalled Labour’s record of introducing reforms, notably allowing only 10% of hereditary peers plus the office bearers to remain in the House of Lords. Even the 92 hereditary peers would be phased out according to a major reform that can take place before the general election.

There was a lively discussion on the way forward to bring about the elected second chamber. There was scepticism on Labour’s sincerity in portraying such reform as a means of restoring public faith in parliament. It was proposed that there were other establishments, either rivalling or complementing the Westminster Parliament, e.g. the European Parliament and the devolved Assemblies in the UK. It was also suggested that a referendum might be a good idea on the issue of reforming the House of Lords.

There were some positive comments, acknowledging the role of the present Chamber as a body comprising diverse, efficient and professional people. I suggested that the electorate might not become sufficiently enthused, engaged and informed about the election of yet another body. The very concept of an elected chamber may destroy the image of the House of Lords, which is so different from the Westminster parliament where members are often elected by an electorate not influenced by the convictions of the candidates but persuaded by the Media like the Sun newspaper or even dejected by a wrong result of a football match. I felt that the present state of affairs should continue as long the Queen is our Head of the State. I almost suggested that the House of Lords should be abolished thereafter!