On life, liberty and the pursuit of happiness

Home/UK/On life, liberty and the pursuit of happiness

On life, liberty and the pursuit of happiness 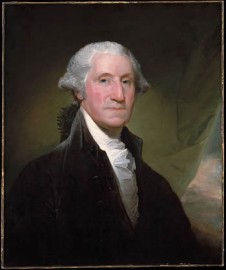 George Washington (portrait by Gilbert Stuart, in the The Metropolitan Museum of Art, New York)

Partly as a result of the gridlock in the USA election, I came to realise that Great Britain’s system of government has become anachronistic and thoroughly retrograde.

Realisation came whilst re-reading Alastair Cooke’s 1970s publication “America”. Cooke traces in great detail how the Founding Fathers of the USA carefully devised and built a system of government incorporating checks and balances such that no one individual or body could become supreme and impose its will or philosophies on the nation as a whole, except with the nation’s consent.

Most of this came to pass in the ten or fifteen years immediately following the War of Independence. The process, it seemed, was pretty much the same as that which changed the face and history of Britain between Magna Carta and the Reform Act of 1832. In medieval England the Monarch found he needed the Nobles for funds and to provide armies to fight his wars for him: this dependence gave rise to the House of Lords. The Monarch also found he could not single-handed keep his peace and justice and know what was going on throughout the country – which in turn spawned the system of county Sheriffs and Circuit Judges and, ultimately, the House of Commons and Judiciary. We took 600 years – America with the benefit of our case history did it in twenty. In Britain, the Monarch, the Commons, the Lords and the Judges. In America, the President, House of Representatives, Senate and Supreme Court.

Fine, I thought, we can pat ourselves on the back as being the model for the world’s most powerful nation. But then an awful truth came floating to the surface: we may have put together this ideal “checks-n-balances” system of government in the first place but, slowly and deliberately, we have destroyed it away again.

First, we emasculated our Monarch. We decapitated him in 1649 but allowed his son to return in 1660 with greatly reduced powers. Gradually in the next 300 years the Monarch became more and more of a puppet until today he/she does little more than open things. In the provinces the Vicar or the President of the Ladies Circle opens the village fëte and gives out prizes. The Monarch opens National Fëtes and gives out National Prizes.

So there went one essential check on the other power bases.

Having achieved this the Commons then went after the Lords and, instead of insisting it become an elected body, managed to emasculate it as well. Today, the Lords is a mixture of a few remnants of the Nobles who were lucky in the 1998 lottery plus political relics put out to grass. They can talk but they cannot act.

It leaves the judiciary. But here the British model differed from the beginning in comparison with the American. It differed in two aspects. As a general principle of law, British justice follows precedent. A plaintiff in a civil case is likely to receive judgment in his favour because a hundred and fifty years ago another judge, sitting elsewhere and in quite different circumstances, interpreted the law in a certain way. But America had something better than precedent – it had a written constitution to guide future generations of judges.

The second difference is the judiciary’s ability to act as a check on laws and regulations enacted by Congress and Parliament. In Britain it was assumed that judges could exercise this check by reason of their membership of the Lords. But when the Commons finished their task of emasculation this check vanished, and the judiciary were left with only individual citizens to pronounce judgment upon. They no longer have a constitutional role to play. In America the primary reason for which the Supreme Court comes together in full session is to consider Acts of Congress and challenges to the Constitution and to ensure that the rights of all the American people under the Constitution are preserved.

So Britain, the state that first produced a balanced bi- or tri-cameral system has allowed its strongest body – the Commons – to systematically erode and destroy its opposition. Imagine if the House of Representatives in Washington was permitted to pass into law measures that emasculated the United States Supreme Court and reduced the Senate to a coffee house talking shop. And then told the President that his only function in future was to light the fireworks on the White House Lawn July 4. This, basically, is what the Commons has been allowed to achieve in Britain since 1649.

But help may be at hand to bring the British system back into balance.

Ironically, it is the Supreme Court of the European Union that today is assuming the role of the Supreme Court in America. Much as the British people, educated primarily by our tabloid press, may rail against Brussels and a “Federal Superstate”, Europe may be their only guardian against the excesses of Britain’s uni-cameral government that has taken to itself all power and all jurisdictions.

Today, British subjects, instead of sneering at the European Union and making silly jokes about square bananas, should be giving thanks that it may in some measure restore to them part of their lost democracy.

I was concerned enough in early 2001, when writing the essay, but events since then have, if anything, continued the process of concentrating power in the hands, not just of the Commons, the equivalent of America’s House of Representatives, but more narrowly still with a handful of Secretaries plus non-elected “advisors” in the office of Number 10 Downing Street.

The powers of patronage of Britain’s Prime Minister have always been absolute: he chooses his Secretaries and their junior Ministers from the elected MPs of his own party – currently numbering just over 400. His decision is final: he has no need to seek approval from the country or any other political body – not even the Commons. British Ministers undergo no confirmation process as in the US. Also, the Prime Minister has close advisors who are answerable to no-one. The process began with Margaret Thatcher who relied for much of her background advice on Keith Joseph and Bernard Ingham. Under Blair the process has been extended to the point that a large part of the country believes Alastair Campbell actually rules Britain.

It appears that the country has, at last, begun to wake up to what has been going on. The catalyst has been the Iraq war with Britain joining America in invading a country against the immediate wishes of at least seventy per cent of the population. The next ten years will be very interesting.

A year has gone by and suddenly the Government of New Labour is in considerable trouble. The almost total collapse of the justification for the war, presented as a mirror image of George W Bush’s justification, seems to be inexorably leading to the departure of the Prime Minister but a week is a long time in British politics. Suddenly, Lord Hutton’s Enquiry report into the death of Dr David Kelly has completely exonerated the government of any wrong doing. Events may reverse this conclusion but the collateral result of the Hutton report has been the partial emasculation of the BBC.

This has reminded me that in my account of the democratic pillars on which the British State rests – Monarchy, Lords, Commons and Judiciary – I had overlooked the BBC. For this omission I apologise: the BBC is, and always has been, a powerful force for democracy in Britain. Since the 1920s when the BBC was established, successive governments have periodically tried to control what it says and does in order to bring it under government control. The present government of New Labour is no exception, except that the pressures have not come primarily from Parliament but from the un-elected Special Advisors surrounding Downing Street. And as of today, at the end of January 2004, they have scored a major victory.

So my original summation of historical events must now read:

It’s not a pretty picture.

Geoff Taylor is a retired CEO with thirty years in business in USA and the Far East. The views expressed in this article are those of the author and not necessarily those of Federal Union. First edition December 2001. Updated January 2004.