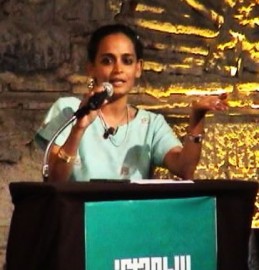 The collision between national sovereignty and democracy got another illustration today, this time courtesy of the justice minister of India.

Arundhati Roy, the novelist, faces the prospect of prosecution for having declared that Kashmir was not an integral of India.  The status of Kashmir is a matter of controversy between India and Pakistan and many thousands of Indian troops are deployed in Kashmir in pursuit of the Indian government’s view of things.  The presence and actions of those soldiers are themselves grounds for controversy, a controversy into which Ms Roy has entered.

The Guardian reports the reaction of the justice minister, M Veerappa Moily, as follows.  The remarks made by Ms Roy were “most unfortunate”.  He went on:

“Yes, there is freedom of speech … it can’t violate the patriotic sentiments of the people.”

Most federalists would not share the view that political opinions about a country’s territorial integrity should be suppressed: we think that democracy is more important than that.