Peace and security are still not the same thing

Home/Blog/Peace and security are still not the same thing

Peace and security are still not the same thing 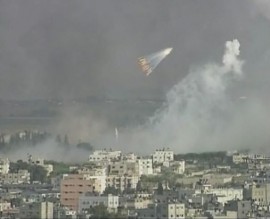 Given that the Hamas government in Gaza considers itself to be at war with Israel, it is hardly surprising that Israel seeks to enforce an arms embargo against Gaza. All the complaints about an Israeli violation of international law in stopping and searching the aid flotilla need to acknowledge the need to prevent rockets being fired over the border at the Israeli town of Sderot.

As this blog has observed before, peace and security are not the same thing. Israel appears determined to achieve security, when actually it should be looking for peace.

¤ ¤ ¤
At the time of Operation Cast Lead, Israel’s invasion of Gaza in January 2009 in an attempt to quell rocket attacks on Israeli towns near the border, President Barack Obama declared that “No democracy can tolerate such danger to its people”. But a democracy has to be careful about how it acts.

Between 295 and 926 Palestinian civilians were killed in Operation Cast Lead (the lower figure is from Israeli sources, the higher from the Palestinian Centre for Human Rights). Since 2001, 24 people had been killed in Sderot by rockets fired from Gaza, which according to BICOM would correspond to 240 people being killed in the UK (which has ten times the population of Israel).

Let us continue this comparison. In Northern Ireland, the Troubles (from 1969 to 1998) saw 1,114 security personnel killed. What would have been the reaction if the actions of the security forces in response to this threat had led to the deaths of more than 13,000 civilians in Northern Ireland? (This is the ratio of victims in Gaza and Sderot, using only the lower Israeli figures.)

In fact, we know what that reaction would be. The British security forces during that time killed 187 civilians, including, on 30 January 1972, 14 demonstrators on what became known as Bloody Sunday. It was a shocking scandal and has finally become the subject of an official inquiry.

It is pretty distasteful to add up the deaths on each side as though something can be decided on the basis of the maths. Every single death is a tragedy and I am not supposing that X number of civilian deaths somehow justifies the inflicting of Y casualties. My point is to show that Israel is not unique in facing a terrorist threat and should not seek to evade its responsibilities in dealing with that threat. (Hamas in Gaza is too weak to pose an existential threat to Israel or to the Jewish people, however much it might wish that it could.)

Even if President Obama was right in saying what he said about democracies, that does not mean that every democracy would behave in the same way, nor that any democracy is entitled to disregard the nature and values of its own democracy in defending itself.