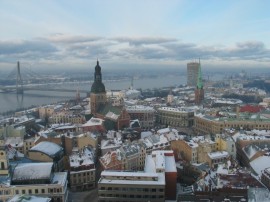 There is a referendum in Latvia on Saturday on a proposal to make Russian an official language.  Around one third of the population have Russian as their first language (compare that with the 6 per cent of Finns who speak Swedish rather than Finnish – both are official languages in Finland).

The story is complicated by the fact that the Russian speakers are, on the whole, relatively recent arrivals, brought to Latvia by the Soviet occupation and settled there now that occupation is thankfully over.  But even if the new arrivals were foreigners or immigrants once, the passage of time changes things.  If people are being born and growing up in Latvia, speaking in large numbers a language other than Latvian in the home, can that language be kept out of public life?

This website has observed before that for everyone in a country to speak the same language all the time is odd rather than normal.  As an ideal, it is the product of 19th century nationalism, and is ripe for replacement with a more sophisticated view of the world.

The difference, of course, is that Russian is not (yet) an official language of a member state, and for officialdom, that might be that.  But this website is more interested in the interests of citizens than the interests of officials, and the case for Russian should not rest on national endorsement.