Punished by the EU

Home/Blog, Europe/Punished by the EU

Punished by the EU 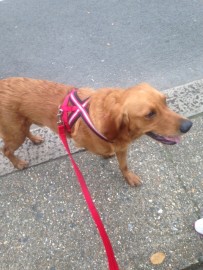 I borrowed a dog yesterday. There’s a website where people who don’t own dogs but want to walk them can make contact with dog owners who want to put their feet up for a bit. A few minutes on the site and the exchange of a few emails got us the company of a good-natured retriever for a couple of hours in the park. He walked, he ran, he chased a ball, he sniffed the bottoms of other dogs and the ground where other dogs had been. He did a lot of sniffing, that dog.

I read a lovely piece a while ago about dogs and how they are different from people. The next couple of paragraphs come from that source, but I can’t give it credit as I can’t remember what it was. Anyway, the starting point was the idea that dogs are less evolved than humans: dogs can’t recognise themselves in mirrors, for example.

The response was that this is a very human-centric way of looking at things. Why is recognising yourself in a mirror the test of anything? Dogs, after all, can identify each other by the scent of their urine. Can you distinguish between your friends that way? Thought not. Who’s feeling more evolved now? A lamppost, went the source I can’t remember, is like a Facebook page for dogs: they can tell who else has posted on the page and perhaps will leave their own comments too.

The point of this story is that it’s not all about us. There are other ways of looking at things.

Take the discussion about whether the EU27 will try to punish the UK for leaving the EU. To deny British companies access to the single market without tariff and non-tariff barriers would feel like a punishment, and would invite retaliation, and would be economically harmful to everyone. Why would they do that? Can’t they recognise themselves in a mirror?

But look at it the other way. The European Union has for nearly 60 years been a complex web of trade offs and partnerships – and a few sacrifices too – in the pursuit of an integrated political and economic Europe. To allow a country to pick and choose which bits it wants would be to risk the whole thing unraveling, particularly if that country had just voted to Leave in a referendum. It would be self-destructive to give in to such demands. The least economic harm would come from standing firm.