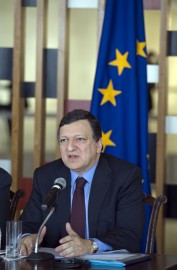 A vote by the European Parliament earlier this week confirmed José Manuel Barroso in office for another term as president of the European Commission. Mr Barroso had been more or less openly campaigning for this result for the past year, so he can look back with considerable satisfaction on what he has achieved. I think the rest of us can probably be a bit less pleased.

First of all, the election itself has been widely mocked. There was but a single candidate, after all. However, that is not Mr Barroso’s fault. Where was the Socialist alternative? The Socialist group in the EP voted against Mr Barroso’s nomination, but they did not put forward anyone else instead.

Next, which rules was Mr Barroso elected under? The Nice treaty reigns at present, so he is the Nice president. When the Lisbon treaty comes into effect, as we hope it will, the rules change. The powers of the Commission president become subtly different, and his method of election changes too. Fortunately, Mr Barroso would have been elected even under the new rules (which demand an absolute majority of MEPs rather than just a simple majority), but the uncertainty does not help.

A third point to note is the way in which the MEPs themselves voted. The Socialist group formally opposed him, but the Socialist MEPs from Portugal and Spain voted in his favour. It would be foolish to deny that there are differences of perspective among the MEPs from different member states, and that these differences will translate into different policy preferences at European level, but it is a pity that national origin trumped party loyalty in this vote. Mr Barroso had previously secured the support of the Socialist prime ministers of Portugal and Spain, so the MEPs could perhaps claim that national party loyalty was more important than loyalty to their European party.

A fourth flaw is that the vote took place in Strasbourg. The modern home of the European Parliament is in Brussels, and most of the MEPs would prefer to meet there all the time. Brussels is better connected both for transport and for media. The election of Mr Barroso would have got greater attention if it had taken place there. The EP meets in Strasbourg only because it would take a unanimous decision of the member states to change it.

And lastly, there is the reaction of the federalists to Mr Barroso’s victory. Some of them are pleased with his victory, because it will enable the EU to take the next steps forward. Others are critical, because the EU needs to take more than the next steps. Europe needs an inspirational and transformative leader, they say, and Mr Barroso is not it. Myself, I am in the former camp: I think opponents of Mr Barroso are looking in the wrong place.

Even his supporters do not declare that he is the man to lead the next stage in Europe’s democratic revolution. There are some substantial steps that need to be taken to strengthen the EU for the 21st century, both as a power and as a democratic power, but Mr Barroso is not the leading advocate of these steps. However, if he were such an advocate, he would not have been elected president of the European Commission. There is not at present the appetite among the national governments for such steps to be taken, and they would not have gathered their support behind a candidate who thought they were wrong.

It is a human characteristic to let the best become the enemy of the good. In this respect, the federalist movement is all too human. So, rather than criticising Mr Barroso, we should support him and work with him in addressing the immediate challenges faced by the EU. (Andrew Duff describes them well here.)

For inspirational and transformative leadership, though, the federalists should seek to provide that themselves.