Reflating the Eurozone: The Case for Eurobonds (16 October 2014)

Reflating the Eurozone: The Case for Eurobonds (16 October 2014) 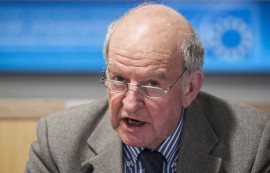 Stuart Holland argued as far back as 1993, in a report for former EU Commission President Jacques Delors, that EU-issued bonds should not be counted as national debt and that they offered the prospect of a European New Deal in the face of the deflationary consequences of the Maastricht Treaty. In recent months, the argument for effective reflation in the Eurozone has been gaining strength. Economic stagnation and high unemployment rates in many Eurozone countries are becoming politically unacceptable, and are politically de-stablising member states. The ECB and many national governments have recently called for more growth-oriented policies. The important question is whether even such policies will be sufficient, or whether stronger measures will be required that would tackle more fundamental problems within the EU and the Eurozone. Stuart Holland will address these issues in the light of his forthcoming book on the subject.

Stuart Holland, a former Labour Party MP for Vauxhall, is a leading authority on regionalism and regional economics and has advised many European governments, including the UK, on economic policy. For many years he was the Chief Economic Advisor to the European Economic and Social Committee in Brussels. Professor James K Galbraith praised him as the „godfather of Eurobonds”. Stuart is the author of the forthcoming book “Europe in Question”. He is also the co-author of „Modest Proposal” with James Galbraith and Yanis Varoufakis, arguing the case for Eurobonds.

If you would like to attend this event please register using Eventbrite.