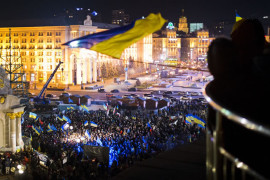 We, European federalists, are deeply moved by recent events in Ukraine and express our wholehearted support for a democratic and pluralistic Ukraine, in which human rights and dignity are respected.

We condemn the use of force by the Ukrainian authorities against the protesters of the Euromaidan and extend our heartfelt condolences to the families of those who have been killed in the recent weeks.

We consider that the millions of Ukrainians who have ignored the freezing cold to express their desire for the European future of their country provide inspiration for all Europeans.

We consider that the future of the people of Ukraine and that of the other Eastern Partnership countries, as well as of Russia, lies in Europe. We thus welcome recent developments, such as the repeal of the provisions, limiting the right of the people to assembly freely and encourage the conduct of a sincere dialogue between all political forces on the future of Ukraine.

The European Union should actively support this process and step up its engagement with the Ukraine and the other Eastern Partnership countries. At the same time the EU should enhance its dialogue with Russia, in view of renewing their strategic partnership.