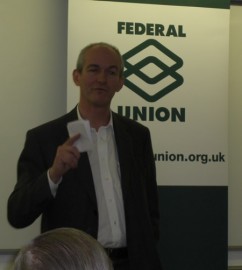 The opening session of the conference, “After Lisbon: the European Union and democratic politics”, was addressed by Richard Corbett, former MEP, now member of the cabinet of President of the European Council Herman Van Rompuy.

Mr Corbett commenced by asking the audience if they could think of any other international structure as democratic as the EU with a directly elected Parliament etc and they concluded that there is none. All EU legislation requires prior scrutiny by the national parliaments, then the agreement of both the Council of Ministers and the EU Parliament. Thus, there is first an eight week period for national parliaments to look at draft legislation. This is ostensibly a check to see if it is in accordance with the principle of subsidiarity, though in practice this will not normally be a problem (the Finnish parliament, which has conducted such an examination since it joined the EU in 1995, has never once been found draft legislation in breach of subsidiarity). In practice, this eight week period will enable national parliaments to look at proposed measures even before their own Ministers can take a position in the Council of Ministers – thereby helping to shape the position taken rather than just hearing about it afterwards. Then, at European level, we now have a bicameral legislature consisting of the Parliament and the Council of Ministers. There has been a directly elected Parliament since 1979. It now has wide powers whereas at the outset it had been only consultative.There is a full range of political parties in the Parliament (not just from the parties that are in government)and the MEPs are grouped according to political affinities and not countries of origin. The Lisbon Treaty requires the Council to deliberate in public on legislation.

The Treaty also requires the President of the Commission to be “elected” (not just confirmed) by the EU Parliament and the candidate submitted to Parliament must be chosen “taking into account the European Parliamentary elections”. This could well lead to European political parties putting forward candidates in the future. Barroso is unlikely to go for a third term so next time will be an open contest. The President of the Commission is a collective political choice, and linking it to the results of the Euro elections would create the sort of link between parliamentary election results and the leadership of the executive that is common in most European countries. Could this lead ultimately to the election of the whole Commission on the basis of a parliamentary majority? That might be too far and too fast, however, for most governments which will want to continue to nominate “their” Commissioners. But the link to the President of the Commission would already be significant.

The Treaty also changes the role of another President: – that of the European Council of heads of government. Instead of changing every six months (every second or third meeting!) by Buggins turn, the PMs now choose their chairman for a 30-month once-renewable term, which could mean a total of five years. This gives greater continuity and provides a full time President (who does not have to simultaneously run a national government). There will be an interesting balance between the President of the Commission and the President of the European Council – newspapers differ on which one they are calling “President of Europe”! Should the positions in due course be united into one or be occupied by the same person? This is what has happened at the next tier down with the positions occupied by Patten and Solana having been united (“Patana”) in the position of Cathy Ashton on foreign affairs.

The ordinary Council still has a six-month rotating Ministerial chair for sectoral formations (transport, agriculture, etc) but this no longer applies to the Foreign Ministers formation, now chaired by Cathy Ashton. The European Council, now recognised as a separate institution, has Van Rompuy chairing it, so the Prime Minister of the rotating Council Presidency will no longer have a role as chair, nor as external representative.

On the Lisbon Treaty: it is seldom the practice in any country that international treaties are ratified by referendum. Only Ireland (which is constitutionally obliged to) held a referendum on Lisbon. Lisbon produces a much more democratic EU.

During a lively question and answer session Mr Corbett mentioned concern should a newly elected Conservative Government in the UK adopt an anti-EU stance. The Conservatives had already alienated many centre-right parties, including the governing parties in both France and Germany, by withdrawing from the EPP which also weakened the Conservatives position in the European Parliament. Cathy Ashton will appoint the EU Ambassadors. There is a new right of petition: if one million EU citizens endorse a proposal then the Commission must put forward such a proposal or justify its refusal or inability to do so. Asked about EU defence forces Corbett replied that EU troops can perform in places where NATO would not be acceptable e.g. in Georgia as at present. Although much is now done through majority voting which is now simpler requiring only a “double majority” (countries and populations tallied) rather than the previous triple majority, there are still matters such as changes to the Treaty, security and foreign affairs and harmonisation of taxation which will continue to require unanimity.

After lunch and the formal AGM both Richard Whitman, Professor of Politics at the University of Bath, and Brendan Donnelly, Director of the Federal Trust, spoke on the theme “After Lisbon: the European Union and its role in the world”. Richard Whitman said that there is now a compulsive reflex among EU states to consult with each other and there is now a more rapid EU response to foreign issues. The biggest change is the creation of new instruments, the smarter use of sanctions etc. We shall need time to judge the effectiveness. There are anomalies and there is a lack of implementation infrastructure. There is likely to be a Defence Ministers’ Council which is not in the Lisbon Treaty. There remains a European Neighbourhood Commissioner despite there being the new High Representative (Cathy Ashton) which undermines her role. The creation of the European External Action Service gives capacity to have an engine for European foreign policy. EU delegations in third countries will create a different order of representation. Should they have a different role from current national embassies?

Brendan Donnelly said that there are federalising elements in the Lisbon Treaty. Federalism is a set of values. Prime Ministers are reluctant to share sovereignty on foreign affairs which they recognise they have to on trade and other issues because they can make a mark, get headlines and have an impact more than they can on domestic policy issues. It makes them feel good. We need a better federal structure for the euro although that could make it more difficult for the UK to join. Foreign affairs is still too much subject to the unanimity rule. Despite what is often claimed by its opponents, the Lisbon treaty does not represent a great step forward in decision-making on external affairs.

During the following question and answer session the point was raised about whether Cathy Ashton would be able to rely on national governments for advice on foreign affairs but it was felt that she would have to rely on the civil servants in the External Action Service. Sir Michael Palliser recounted that his father-in-law had found that, as Secretary General of NATO, he had lacked the clear advice from a civil service that he had had in a previous role as Belgian Prime Minister. Brendan Donnelly agreed that the most positive thing about external affairs that had come out of the Lisbon Treaty was the European External Action Service. Richard Whitman felt that if Cathy Ashton can set this up during her term of office then that will be an achievement in itself. Greater involvement of the EU Parliament in external trade policy may, possibly, have an effect on human rights policy but only marginally. Maybe the economics of external relations will force a shared defence and lead to more coordinated foreign policy.