Sir Jonathan Sacks: Europe needs a new covenant and the time to begin it is now

Home/Quotebank/Sir Jonathan Sacks: Europe needs a new covenant and the time to begin it is now

Sir Jonathan Sacks: Europe needs a new covenant and the time to begin it is now 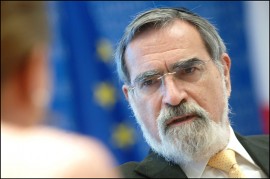 From a speech by Sir Jonathan Sacks, Chief Rabbi of the United Hebrew Congregations of the Commonwealth, at the European Parliament, 19 November 2008:

“Therefore, I want to add one other word, which played a significant part in healing fragmented societies. The word is ‘covenant’. It played a major role in European politics in the 16th and 17th centuries in Switzerland, in Holland, in Scotland and in England. Covenant has been part of American culture from the very beginning to today, from the Mayflower Compact in 1620, to John Winthrop’s speech aboard the Arabella in 1631, all the way through to the present. I do not know what Barack Obama will say when he makes his inaugural speech but he will either mention or allude to the concept of covenant.

“Covenant is, of course, a key word of the Hebrew Bible for a simple reason: biblical Israel was formed out of 12 different tribes, each of which had insisted on retaining its distinct identity.

“You can have a society without a state – that has happened at times in history – but can you have a state without a society, without anything to hold people together? I do not know. You can hold people together in many different ways: by force, by fear, by suppressing cultural difference, by expecting everyone to conform. But when you choose to respect the integrity of many cultures, when you honour what I call – as the President reminded us – the dignity of difference, when you honour that, then to create a society you need a covenant.

“Covenant restores the language of cooperation to a world of competition. It focuses on responsibilities, not just on rights. Rights are essential, but rights create conflicts that rights cannot resolve: the right to life against the right to choose; my right to freedom against your right to respect. Rights without responsibilities are the subprime mortgages of the moral world.

“What covenant does is to get us to think about reciprocity. Covenant says to each of us: we must respect others if we expect others to respect us; we must honour the freedom of others if they are to honour ours. Europe needs a new covenant and the time to begin it is now.”