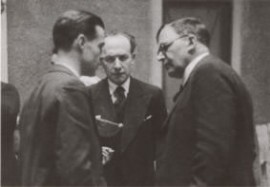 Denis de Rougement, Henri Brugmans and Alexandre Marc, leaders of the UEF in 1947

Being British I am not particularly interested in theory and not at all in philosophy. I am lost in the subtleties of integral federalism. In fact I am just Plain Jane Bull. I go at things like a bull at a gate and frequently behave, as my friends tell me, like a bull in a China shop.

In other words, I am concerned only with practical matters – what we need; why we need it; how we are going to get it.

To my mind it is high time we sorted out the Exact Connection between World Federation and European Federation how they are interconnected and why they must be.

There is no good to argue here that the only answer to world war is world federation – and by that I mean the transfer to an elected world government of control over the relations that may lead to war and the weapons with which they are made. Nothing less will do. And that is why we are all World Federalists.

But World Federal Government, whether it comes sooner or later – and if it does not come soon it will be too late – must inevitably have only limited powers control over international relations, of the use of atomic power, of armed forces, of strategic bases, “et c’est tout”. Nothing more is possible.

But in at least one war-torn area of the world that is not enough. Europe needs complete federation. Economic and political as well as defensive. It needs common law to defend the right of man, and common planning to ensure work, food, homes and security for all everywhere.

The only answer to the German problem is to integrate an industrially strong Germany into a United Europe. Today we are forcing a weak, starving and hopeless Germany towards another Hitler and another war. We are making the Germans hate democracy and are thus defeating our own ends, for the only Germany that other nations can live with is a democratic Germany.

Europe needs Germany and Germany needs Europe. With hope for the future through industrial revival and political federation the whole state of affairs in Germany would change overnight. With European economic planning the coal of Germany could be used to restore the whole of Europe; the industrial products of the West could be exchanged for the food grown in the East; European public works could bring prosperity and a rising living standard to Europe’s poorer peoples; and-there would be a real possibility of getting Europe on her feet again.

All that is on one plane. World problems are on another. And there is no incompatibility between the two. When people say you cannot work for both at once, it is like saying because the British Government has put through an Act to give social security to all, the County of London cannot fix its own street-cleaning or lighting system; or because the Swiss Government controls the transport of the country, the town of Montreux cannot fix its own tram-fares. The things are on different levels. Both are necessary and both can be worked for at once. One is not a step towards the other. It is part, and an essential part, of the other.

Europe will be useful to and safe for the world only if it is united and prosperous.

That is why I stick to my Twin Aims policy – European Federation within a World Federal Government – that I advocated nearly a year ago to Luxembourg. And I still feel it gives the answer – if there is an answer -at the Russian question.

For all these reasons I am delighted that the Movement for World Federal Government now has a large number of Europeans on its Council. I am delighted, too, that some of the World Federalists have stayed on to see how well the European Federalists are organising to achieve their goal. I hope we can now all go forward together.

We have all the theory and all the philosophy we need. We know why and how we intend to proceed – on the world plane by transforming UNO and going ahead with the Peoples’ Assembly plan; in Europe by integrating economics and justice.

What we need is action. Like M. Aaron with his “N’y a qu’a”, I have a tribe that must be disposed of. My tribe is called the Buts. “I am a federalist of course, but what can I do about it?” “Of course, UNO as it is is useless, but do you really think it can be changed?” “I agree that national sovereignty is the root of our troubles, but you can’t expect States to surrender it”, and so on and so forth.

It is no use being a But. It is no use your coming here and listening to speeches and possibly even agreeing with them, and then going home and doing nothing about it. The peoples must be made federal-minded. They must be made to understand what federation would mean for them, and to demand it. They must be brought to the, point where no member of parliament is safe and no candidate for parliament has a hope of being elected unless he includes federation in his programme.

And that is a task for all of us. We can all talk to our friends; we can all write challenging letters to our local papers, and keep up the correspondence as long as the editor will let us.

But first of all we must understand the need for federation ourselves. “Tout comprendre, c’est tout fédérer.”