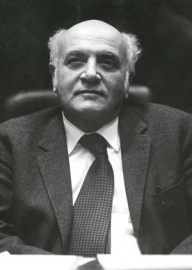 This speech was delivered by Altiero Spinelli, founder of the Italian Movimento Federalista Europeo, at the founding Congress of the Union of European Federalists in August 1947.

We cannot and do not wish to conceal from ourselves that the only countries capable of taking European initiatives at present are those in the Western or, one may say, the American part of the continent. Nothing is sadder than the fact that the ideal Europe, the cradle of law and liberty, constitutes only a part of the geographical area of Europe. What is more, that area is certain to shrink, and European civilization to become a mere historical memory, unless we can at least unite what at present remains of it.

European initiatives are possible were American influence preponderates, mainly because in most of Western Europe democratic institutions continue to exist, albeit shakilv, while in Eastern Europe they have completely disappeared. But the opportunities also depend to a large extent on America’s own
position. The Americans are confronted by alternatives of historical importance and have not yet chosen between them. America cannot return to prewar isolationism: she is irrevocably involved In European politics. But that involvement may develop in many different ways according to the complicated interplay of actions and reactions between the American situation and that of Europe.

The US must maintain their high standard of living and level of production, and cannot do so if the rest of the world is plunged in povertv. Hence American policy tends to be opposed to reserved markets, closed economics, national planning and autarky. America has an interest in European prosperity and may promise aid to European countries on the sole condition that they succeed in developing a rich, open and orderly economic system. This is the rationale of the Marshall Plan, an opportunity that the European democracies must grasp and turn to their advantage. However, all the Americans can do on these lines is to offer us the opportunity. They can accept the formation of a peaceful and prosperous European union that would be economically useful to them while reducing their military commitments in the old continent and diminishing the area of contact and conflict with the Soviet Union. But they cannot themselves create such a union, and if the Europeans cannot seize the opportunity the US will be more and more tempted to move from the liberal alternative to that of imperialism. This latter alternative is strong in America: it develops in parallel with the former one, and it is this which makes every American initiative and intervention of such crucial importance to us.

If democratic Europe does not save itself by its own efforts, making use of the American opportunity, and does not develop federal institutions in the economic and political fields, then it is American imperialism that will prevail.

If the US has to maintain its positions of strength in a Europe that is incapable of normal autonomous life, it will have to turn each country into an economic, political and military protectorate, exploiting it in one way or another or granting it this or that privilege. That is how empires come into existence. Liberal America is still alive and active, but is gradually losing ground to imperialist America. When that process is completed there will no longer be any chance of salvation for European democracy

It is generally objected that a federalist plan of action on these lines will tend to form a West European bloc subservient to America and hostile to the Soviet Union. Many federalists are frightened by this accusation and quit the ground of reality to take refuge in vain and cloudy hopes.

We shouId firmly rebut such criticism. To federate the European democracies is the only way to prevent their becoming protectorates and instruments of an imperialist American policy, to prevent the development and consolidation of an American imperial, colonizing policy in Europe. The many Americans who are in favour of federal development in Europe are not imperialists but are those who fear an imperialist future for their country and wish for the creation of a situation in Europe that will avert this possibility.

A European federation, even if only a partial one, will be independent of America in a way that is impossible for the states of Western Europe in isolation. Hence such a federation can resist and eventually overcome the disastrous policy of spheres of influence. The original federation must remain open to all other European countries: it must gradualIv and peacefully restore the values and institutions of democratic civilization to countries where they have been lost and can only be revived within a Europe purged of baneful influences and based on laws of justice and peace. In other words the federalist solution is unquestionably opposed to Soviet imperialism, since it would be the task of a federal Europe to check and finally abolish the whole imperialist system of zones of influence, controls, iron curtains and so forth: but it is opposed to Soviet imperialism on the same grounds as to the American variety.

If today it is possible to envisage the first steps towards federalism being taken in countries under American influence but not elsewhere, this is simply because in the former, as in America itself, there are possibilities of anti-imperialist and anti-totalitarian action that no longer exist in Eastern Europe, though we hope they wIll be revived there.

The opportunities to set about constructing a federal democratic Europe will probably exist for a few years longer. The role of the great world empires is no doubt an obstacle, but in so far as their intervention is not complete it gives an urgency to the problem of European union which may be salutary in its effect.

Having defined the concrete possibilities of bringing about a European union, we must recognize that nothing has yet been done in this direction, and that grave responsibility for this fact rests on leading political classes in the democratic countries. New men and new forces have come on the political scene. It might have been hoped that recent sufferings would have convinced them of the absurdity of simply restoring the old national sovereignties. They ought to have understood that the totalitarian poison was not a sad monopoly of Germany, Italy and one or two other countries, but is at work more or less secretly in all European countries, perhaps without exception; and that the war itself, anti-Fascist though it was, has reinforced the totalitarian and anti-democratic elements that exist everywhere.

However, these facts were ignored and an attempt has been made to restore democracy on an exclusively national basis. The result is that some superficial democratization has been achieved but that it has no solid basis. Absurdity has been piled on absurdity, and none of the gravest problems of the hour have been seriously grappled with. Economic autarky and national planning have been revived, national armies have been re-created, national hatred, rancour and suspicion have been fostered. Today every European nation is poverty-stricken and diseased, withdrawn intoitself, uncertain of the future, unable to raise itself, obliged todepend more and more on political and economic structures that are prfoundly anti-democratic.

There is no future on this basis for democratic civilization. If it is to be once more secured the whole plan of political action must be modified The time-honoured political divisions that are met with in every country no longer have any profound or genuine rneaning. Whatever the external label, we must regard as essentially anti-democratic all groups which see it is their main task to re-establish and conserve the national sovereign state. Even if they do not realize it they are the grave-diggers of civil liberty and well-being, servants of the modern Leviathan, the all-powerful, totalitarian sovereign state.

And, again regardless of the external label, we must regard as a single progressive political elite all those who are resolved to smash the idol of the national state, to limit its absolute sovereignty and to set up federal institutions to administer the common interests of Europeans.

The presence at this congress of men of the most diverse parties is proof that people are becoming aware of a new line of political division. The question is: who is for free Europe and who against it? The task before the UEF is to strengthen this feeling and make it a reality in European political life.

The all-important issue is not whether this or that country has a government of the left or of the right: it is the rebirth of free, democratic. European civilization, which can only be achieved in a united Europe.