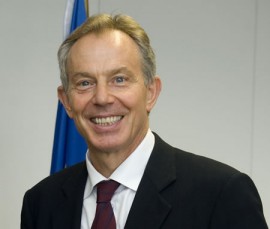 Britain is no longer a sovereign state: it’s official. Summoned to give evidence to the United States Congress on the progress of the war in Iraq, Tony Blair jumps to attention. A video link is set up so that he can explain his thinking and answer questions from national parliamentarians. (Read about it here and here.) The things he has to do when the Americans ask.

For we know that he actually thought this was the wrong thing to do.

When an enquiry was suggested in the UK, the response of foreign secretary Margaret Beckett in parliament was to say this:

“Is this the moment to take a decision and a step of the kind recommended in the motion? My answer is a resounding no. There is absolutely nothing in the unquestionably difficult and delicate situation in Iraq today that makes this the obvious and right time.”

And we also know, from Tony Blair’s response at his last press conference to the questions about the death penalty passed on Saddam Hussein (“she set out the position for the government yesterday and that is all I want to say on it, right”) that Margaret Beckett is the authoritative spokesperson for the government on these questions.

And if it’s the wrong time for the UK to have such a discussion, it is even more true for the Americans, only more so, given that they have so many more soldiers deployed in Iraq. If, as Margaret Beckett said, “Our words in the House today will be heard a very long way away. They can be heard by our troops, who are already in great danger in Iraq. They can be heard by the Iraqi people and by their Government”, words said in the United States congress will be heard even further away. Particular now that it has been demonstrated so clearly which country it is that is making the decisions about whether to stay or go.

¤ ¤ ¤
Tony Blair’s speech last night at the Mansion House, which you can read here, restated his now traditional conviction that Britain must remain both allied to the Americans and engaged with Europe. I agree with that, and agree also that there is no contradiction between the two. I do doubt, though, that “our partnership with America and our membership of the EU are precisely suited to Britain.”

And our membership of the EU doesn’t feel quite right, either. We’re not in the euro and show no signs of joining. We are too often on the edge of things. Tony Blair himself feels obliged to qualify his statement about EU membership with this:

“Provided it eschews grand institutional visions and concentrates on grand practical visions – for prosperity, in energy, fighting crime, in developing defence capability – it has a huge, even exciting future.”

If by “grand institutional visions” he means the constitutional treaty or something similar, he should remember that up until the French and Dutch referendums last year, he was an advocate of that treaty, and he has never repudiated it since. He has merely noted that it is no longer on the table.

But the thought arises: what if British objectives have changed, too? What if Tony Blair’s preferred plans are no longer what they were? If this is the case, then British policy on Europe will indeed have been decided by the popular vote, however this would be the popular vote in France and Holland and not actually in the UK itself. As I said, no longer sovereign.