The citizen as consumer

The citizen as consumer 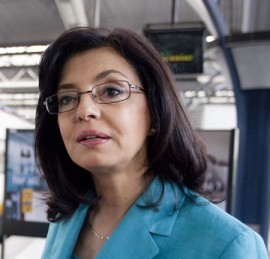 My attention is drawn to a speech earlier this week by Meglena Kuneva, the (first ever) Bulgarian member of the European Commission. I think it is great that Bulgaria is represented in the European Commission, by the way. Who would have imagined it twenty years ago? (Actually, I would have done, but I am an irrepressible optimist. Also, it is Bulgaria the nation and not Bulgaria the state that Ms Kuneva represents in the Commission, before you write in: the representation is moral, not political.)

The speech, though, the speech. You can read it here.

Ms Kuneva was addressing the question of whether the European Union has lost or is losing the ability to act. It is a good question, and does not have a simple answer. She thinks, on the whole, that it is not, although some of her examples request a different interpretation. For example, the constitutional treaty was agreed in June 2004 by the EU of 25, something which the previous EU of 15 had not been able to do.

Well, hang on, the previous EU of 15 had been able to agree the Amsterdam and Nice treaties, and the constitutional treaty of 2004 doesn’t amount to a huge advance compared with the content of those two. And the EU of 15 was able to get those two treaties ratified, even after a referendum No vote in Ireland. You can’t consider the contents of the treaty in isolation from the methods of ratification and entry into force, as I have argued on this website before.

A better argument would be that, while containing more member states and therefore more diverse interests, the EU of 27 now faces the same fundamental issues as it would have done were it still only 15. There is a bit more variation, but the big divides – between city and country, producer and consumer, wealth and poverty, information-rich and information-poor, manufacturing and services, social mainstream and socially excluded – were already there before the latest round of enlargements and the policy challenge is to deal with those various divides.

I wrote about this subject here and I didn’t agree with Ms Kuneva’s argument then. I still don’t. I think it is undeniable that the capacity of the EU to decide and to act has been reduced. Its ability to make a difference when it does decide and act has been enhanced, and that’s what we should exploit.

For example, Ms Kuneva points out that:

“The internal market has led to some significant victories for citizens. For example, effective action at EU level has resulted in lower prices in telecommunications, and lower prices in air transport. The next prominent example might be the forthcoming action to clamp down on excessive roaming charges for mobile phone users.”

The larger the market, the more valuable these achievements are. Let’s have more of them – even if a diverse EU means there are more vested interests to be overcome – and show the European citizen how much difference the EU can make.

There is a further point she makes which also needs to be restated here. It is not enough for the member states to agree to legislation at European level: they must also enforce it themselves. She mentions that there are more than 1,000 infringement proceedings outstanding against member states, a number which will surely grow as the EU enlarges.