The future of federalism

The future of federalism 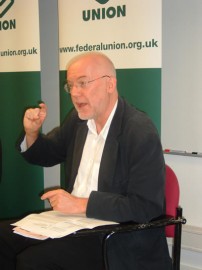 Discussion at the Federal Union seminar on 6 September 2008

What has federalism achieved in the UK, Europe and the world? What is its future agenda? How are these issues connected?

Michael Burgess, Professor of Federal Studies at the University of Kent, opened the seminar by accepting the challenge to look at concrete examples where a British influence could be identified in federalist thinking, but wanted to observe that, in the words of Swiss federalist Denis De Rougemont, “federalism is easy to understand but difficult to explain”.

On that basis, what are the values that federalism represents? Federalism has values, principles and interest, but the values come first. They include: human dignity; equality (in the sense of recognition); respect; reciprocity; mutuality, tolerance (as distinct from toleration); and a notion of political empathy (how does this situation look to someone else?).

From the values come the principles, which include: partnership (federalism implies a contract between different entities); equality (in terms of the actors involved); consent (there have been some federations without consent, but they tend to fail); comity (in German, Bundestreue, meaning the recognition of the interests of the whole); the combination of self-rule and shared rule; autonomy (but not independence); unity and diversity; an “indestructible union of indestructible parts”; and power-sharing (but there is more to federalism than power-sharing alone).

But, empirically, how does this all work? In what way are these values and these principles expressed in political bodies? We would be surprised to see them expressed identically in different places or different forms of political association. This is where we see the British contribution, of which he mentioned three examples.

1. The Philadelphia convention that led to the US constitution – the people involved were firmly in the British tradition of politics

2. Devolution in the United Kingdom, which had achieved much since the mid 19th century. Progress since then had been slow but nevertheless real. There so many federal elements in the British constitution now that it was better to refer to the UK as a “union state” rather than a “unitary state”. It is an asymmetrical union, which is the intellectual fashion these days, but how far can you go with asymmetry without actively encouraging secession?

3. European cooperation and integration also showed a British influence. Federalists tend to rate European cooperation as less important than European integration, but actually they have gone together and still do. Altiero Spinelli was deeply influenced by British thinkers – Lionel Robbins for example – so perhaps in his work, the British made a great intellectual contribution to federalism without even realising it.

Keith Best, Chair of AWF Council and Chair of WFM Executive Committee, then spoke about the future political challenges facing federalism. Many different political developments can be interpreted as being federalist: this should not be a problem because people will naturally think about concepts in different ways. What matters is that the essentials are maintained.

Charlotte Waterlow, in her book “Hinge of History”, quotes two values as being essential: participation; and subsidiarity. These are the ones we should insist upon. Politicians sometimes forget the importance of subsidiarity: in many ways, the UK is the most dirigiste state in Europe. If federalism were to come to the UK, it would be in the opposite way to elsewhere, a state breaking up rather than coming together. For example, when thinking about immigration policy in Scotland, in many ways it makes sense for Scotland to make its own policy. (In the European Union, by the way, immigration now benefits from EP co-decision.)

Federalism is such an interesting and far-reaching idea that it is easy to read it into developments in global governance where it in fact does not exist. But nevertheless some recent developments are federal in character, and this should be noted and celebrated. The International Criminal Court is one such example. It creates a structure of law, which every federal system needs, which is why the World Federalist Movement had made it such a campaign priority.

In the flow of all the different currents of history, there seems to be a trend at the moment towards the establishment of secular values, such as the rule of law, the concept of human rights, and the pursuit of justice. This last point was very important for federalists, who wish to see a more just world: justice is a key part of federalism.