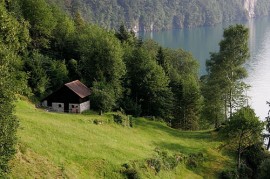 1. A European Community on federal lines is a necessary and essential contribution to any world union.

2. In accordance with federalist principles which call for a democratic structure beginning at the base, the community of European peoples must itself settle any differences that may arise among its members.

3. The European Union is to fit into the framework of the UN Organisation as a regional union under Article 52 of the Charter.

4. The members of the European Union shall transfer part of their sovereign rights – economic, political and military – to the Federation which they constitute.

5. The European Union shall be open to all peoples that consider themselves European and conform to its fundamental rules.

6. The European Union shall define the rights and duties of its citizens in a declaration of European civil rights.

7. This declaration shall be based on respect for the individual and his responsibility towards the various communities to which he belongs.

8. The European Union shall be responsible for orderly reconstruction and for economic, social and cultural collaboration; it shall ensure that technical progress is devoted solely to the service of mankind.

9. The European Union is directed against no-one and renounces any form of power politics. It refuses to be an instrument in the service of any foreign power.

10. Within the framework of the European Union, regional unions based on agreements freely arrived at are not only permissible but desirable.

11. Only the European Union can ensure to all its peoples, small and great, their territorial integrity and the preservation of their own character.

12. By showing that it can solve the problems of its destiny in a federalist spirit, Europe will make its contribution to reconstruction and to the creation of a world community of peoples.

The two European federalist organisations least scarred by war were Federal Union and the Swiss Europa Union Schweiz. Each of them, unaware of the other’s plans, arranged an international federalist conference in the autumn of 1946. The Swiss convened a meeting on 15-22 September at Hertenstein near Lucerne, which concluded with a demonstration on the Rütli plateau, commemorating the first Swiss federal oath there 655 years before. Seventy-eight people attended the conference – 41 Swiss, 13 Dutch and small groups from a dozen other countries, including one British participant, and two Belgian members of Union Fédérale, which ‘regarded itself as a branch of the Federal Union’. Alongside the contribution of the Swiss, the policy of the Dutch federalist movement ‘formed the basis of the Hertenstein Programme’, which was influential in establishing the EUF. It remains to this day the basic statement of aims for the organisation’s powerful German section, Europa Union Deutschland.

From “Federal Union: The Pioneers”, by Richard Mayne and John Pinder (Macmillan, 1990). Copies of this excellent history of Federal Union are available.