The Laeken Declaration: the way to a constitution for the citizens of Europe?

Home/Europe/The Laeken Declaration: the way to a constitution for the citizens of Europe?

The Laeken Declaration: the way to a constitution for the citizens of Europe? 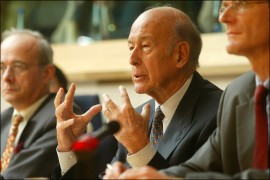 Plenary session of the Convention on the future of Europe

After the embarrassment of the Nice Summit the heads of state and government were obliged to recognise that the old way of working via government representatives meeting behind closed doors has come to an end. An enlarged Europe will founder without a far-reaching reform of its institutions and decision making procedures as well as their simplification and clear demarcation. The events of 11 September finally demonstrated in a brutal fashion that the EU has further work to do on its capacity for action and role in a globalised world.

At Laeken on 15 December a statement was made on the future of the Union. In the Laeken Declaration the 15 national leaders set up a Convention which is to make the EU more democratic, more transparent, more effective in its business and bring it closer to its citizens. The Convention will begin work on 28 February this year and is to undertake the preparations for the next Intergovernmental Conference and a new EU treaty.

Among the matters for consideration by the Convention are better and clearer distribution and separation of responsibilities between European, national and regional levels, simplification of the Union’s instruments of government, more democracy, transparency and efficiency (stricter separation of legislative and executive powers within the EU, strengthening of the Commission and Parliament, extension of majority voting in an enlarged Union and the direct election of the President of the Commission). In addition this EU reform could for the first time lead to a “Constitution for European citizens”.

The fact that for the first time a “Constitutional” Convention of national and European politicians meeting publicly will take the lead in far-reaching reform of the EU and has the possibility of giving the monetary community political legitimacy signifies a gigantic success. Also, a few years ago one could not have dreamt that the Laeken statement would raise the question of a European constitution and that this would now be discussed publicly, in the media and at a convention.

All the same, one can’t be too optimistic about the outcome because when you look at developments at the Laeken summit and read the details in the statement by the heads of government the warning signs flash on.

It is laudable that the European Council was able to agree that the next reform of the EU should be prepared by national and European politicians rather than by diplomats alone. However when the Laeken summit concerned itself with the location of new EU agencies, the heads of state and government put a price on such things as the qualities of Parma ham and Swedish women like horse traders or carpet sellers hammering out a profit for themselves. What kind of a vision of the future of Europe have these people who on the one hand come out with big statements yet when it comes to the point play the embarrassing old power games among themselves? How great is the likelihood that the convention with about 80% of the representation from national parliaments and governments will also “think national”?

The president and vice-presidents of the convention were named by the governments, the European Parliament and the Commission are but weakly represented and in addition the Council of Ministers is to take over the convention’s secretariat. This indicates that the heads of state and government still are not willing to entrust the elected representatives of the citizens with a proper mandate for a constitution.

Other national interests were likewise clear during the summit. In the draft statement which Guy Verhofstadt, the current President of the Council, put before the 15 heads of state and government, there was a better and clearer division of the responsibilities to be discussed. However José María Aznar, the head of the Spanish government, refused to allow any reference to the principle of subsidiarity and the possibility of regional representation in the Council of Ministers (as is the case in Germany). A compromise was finally agreed by which the everyday administration and execution of the Union’s policies could be left to those regions “where their constitution provides for it”. One head of government can now go home content in the thought that he has reduced the Laeken declaration’s references to federalism.

However the risks are not only within the convention in which, as noted, national interest will probably play a large role. There is also the question of what will be done with the results of the convention’s deliberations. The convention will only be able to make recommendations when it can reach a consensus (the principle of majority agreement is still not approved). Otherwise it must put various options forward for consideration. How far will the heads of state and government feel bound by recommendations (or even options)? In any case the results of the convention will only be the “starting point” for later resolutions on reform by the heads of state and government. Their force will be still weaker. The final conclusions of the convention will not be the only starting point for the next Intergovernmental Conference. They will be joined by the results of the member states’ internal debate on the future of the Union. Therein naturally lies the danger that the heads of government will block everything in the end, since the sought after reforms will lead to a treaty upon which all sides must agree.

The convention is without doubt a great democratic innovation, although unfortunately it has only been tasked with preparations for the next Intergovernmental Conference. The way to a new future for Europe is open. Now we must hope that it will be followed properly (and we must seek to influence it) so that the convention makes the breakthrough and at the end of its work comes up with the draft of a real European federal constitution which can make the EU more democratic, more transparent and more efficient.

Lucía Caudet Balzer is Assistant to the General Secretary of the UEF and a member of JEF-Europe’s Federal Committee. She may be contacted at [email protected]. The views expressed in this article are those of the author and not necessarily those of Federal Union. Translated from German by John Towner. First edition, January 2002.