The European Convention: work in progress

The European Convention: work in progress 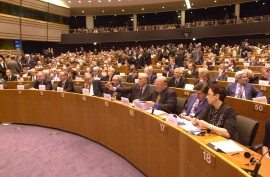 Opening session of the Convention on the future of Europe

Current discussion of the European Convention’s work and prospects centres around three related topics, namely the ability or otherwise of the Convention to arrive at a consensus among its varied members; the likely nature of this consensus if it is achieved; and the probable reaction of the European Council to the content of this consensus. A brief discussion of these three topics provides a useful snapshot of the present state of the Convention’s work and its likely impact.

The first months of the Convention’s activities have seen a wide range of proposals and analyses from groups and individuals. Although they are a minority in the Convention, the radical Eurosceptics such as Jens-Peter Bonde and David Heathcoat-Amory have been predictably vocal. It is difficult to believe that they will be part of any eventual consensus. When the Convention’s work is finished, they will almost certainly produce their own minority report, probably in the form of the draft European constitution that they would wish to see implemented. Such a draft constitution may well attract favourable notice among some sections of British public opinion. But ninety per cent of the Convention’s members are not radical Eurosceptics. Any final consensus within the Convention will need to be a product of their discussions and negotiations.

The more significant likely difference within the Convention’s mainstream will be that between the two broad camps of “intergovernmentalists” and “federalists”. In general, those in the first category wish to tilt the institutional balance of the Union towards national governments, working together in the Council of Ministers, and particularly in the European Council. Their fundamental claim is that only national governments possess the necessary political and electoral legitimacy to render the workings of the European Union acceptable to European voters. Those in the second category, the “federalists”, wish rather to reinforce the present institutional structure of the European Union, and particularly the powers it gives to the European Commission and the European Parliament. Their view is that a supranational organisation such as the European Union can only work efficiently and democratically if its supranational elements such as the European Parliament and the European Commission have the necessary powers to fulfil their respective roles.

Unless the representatives of these two distinct tendencies can find an acceptable compromise between themselves, the Convention will probably not be able to produce a solid measure of consensus in its final report to the European Council. In that case, Mr. Bonde and Mr. Heathcoat-Amory will not be the only authors offering a minority report to the heads of state and government.

It must be said that the boundaries between “intergovernmentalists” and “federalists” are sometimes fluid. Many of the former argue that it is possible to strengthen the role of the Council of Ministers without weakening the Commission or Parliament. Many of the latter insist that they are happy to see the Council of Ministers strengthened, as long as the roles of the Commission and Parliament are reinforced as well. But there are at least two specific areas of the European Union’s activities which are genuine bones of contention between the two camps, namely foreign policy (including defence) and police co-operation. Both Commission and Parliament have had until now only marginal roles in these two fields, where unanimity in the Council has been the rule. “Federalists” would wish to see greater recourse to majority voting in these matters, and a fuller involvement in them for Commission and Parliament. “Intergovernmentalists” would wish to see the present position substantially maintained, perhaps with the present pre-eminent role of the Council being publicly reinforced. If there is to be a consensus at the end of the Convention, a resolution will need to be found for these controversial issues.

The President of the Convention, Valéry Giscard d’Estaing, has recently produced his own first draft for a European constitution. Although the draft is deliberately only an outline, it gives clear clues as to the form he thinks an eventual consensus within the Convention might take. On the one hand, Giscard suggests that the existing federalist elements within the European Union’s structures should be strengthened, and made more explicit. Majority voting in the Council and co-decision with the European Parliament should become the rule in European legislation. The Union would even, if Giscard’s draft were adopted, recognise for the first time in so many words that its member states exercise their shared sovereignty “on a federal basis”. All these suggestions will greatly please the “federalists” in the Convention.

But they will find much less attractive the clearly intergovernmentalist approach that Giscard envisages for police matters and foreign/security policy. Giscard himself probably shares the desire of most leading French and British politicians to allow the Union’s institutions only a limited role in these sensitive areas. But his personal preferences are undoubtedly reinforced by his well-publicised belief that the European Council which eventually adopts a European constitution is anyway simply not going to permit any substantial federalisation of the Union’s foreign and security policy, or give up the predominantly intergovernmental nature of police co-operation in Europe. As is well known, the European Council takes its decisions by unanimity. Giscard is on strong ground when he claims that, whatever the intrinsic merits of the case, at least a strong blocking minority exists among member state governments for maintaining the predominant role of national ministers in foreign, security and police issues.

If “federalists” and “intergovernmentalists” in the Convention are to reach a consensus, it is obvious that compromises will have to be made by both sides. Giscard’s ideas represent one possible point of equilibrium, and it may be that others will emerge. As Chairman of the Convention, he is of course well placed to influence the final outcome. It would be surprising if a final consensus were achieved that was radically different from his preferred outcome. But both sides in the argument will be looking to tilt the eventual proposal emanating from the Convention in their direction. Giscard, for his part, will be trying to construct as broad a swathe of support as possible for his proposals. The current betting is probably on Giscard’s succeeding in eventually pushing through some version of his present draft. His personal authority and the desire of most members of the Convention to participate in a “success” for their deliberations will probably carry the day.

This may indeed turn out to be correct. A smooth and relatively uncontroversial adoption of the Convention’s findings would be a pleasant contrast to the inefficient and bad-tempered horse-trading of the Nice treaty. But there is a genuine and probably well-founded fear from the “federalist” side of the argument in the Convention. It is that they may be persuaded to accept Giscard’s compromise proposals in June 2003, only to see substantial portions of what makes those proposals acceptable to them watered down in the final text adopted by the European Council later in the year.

This is not so much a concern for the “intergovernmentalists”, who will rightly reason that the concessions made to them in Giscard’s proposals cannot easily be unpicked without renegotiating the whole package. By contrast, references to the “federal basis” of European legislation can more easily be jettisoned to gain consensus in the European Council, while the generalisation of co-decision and majority voting may well founder on national vetoes concerning individual areas such as tax and agriculture.

As so often in the European Union’s history, it will be possible for “federalists” in the Convention and more particularly for those active in the Federal Union to take two views of this likely outcome. Some will be disappointed if the Convention’s proposals emerge from the European Council less federalist than they entered them. They may even wish that the “federalist” members of the Convention had been less willing to accept the Giscardian compromise. Others, however, will be comforted by the fact that the European Union will undoubtedly be a more federalist organisation after Giscard’s Convention than it was before. There will be more co-decision and majority voting within the Union’s workings.

There will be a wider recognition that pooled sovereignty needs a panoply of supranational institutions to work efficiently, democratically and transparently. Moreover, these institutions will certainly emerge from the Convention better equipped to perform their natural and indispensable roles in an efficiently and democratically organised federal system.

Above all, there will be no plausible opportunity after the next revision of the European Treaties to speak of “damming the tide of federalism”, as the British government has sometimes glibly claimed in the past. Any objective observer will know that the constitution adopted for the European Union in 2003 or 2004 is essentially a federalist text, with certain anomalies and exceptions allowed to placate one or other Member State, and one substantial area, namely foreign and security policy, in which national governments have not yet been able to agree on federal structures. Any easy talk of bottles that are half full or half empty will be entirely beside the point. The constitutional structure set out in the Treaty of Rome was on any rational definition of the term an embryonically “federalist” one. Over the past forty years, that structure’s evolution has been, predictably and overwhelmingly, in a more coherently federalist direction. That evolution has not yet reached its final destination. But there is no reason to believe that final destination will be qualitatively different from the stages which have led and are continuing to lead towards it. To a large extent explicitly, and to an even greater extent implicitly, Giscard’s European constitution will be a recognition that the work of building a federal European Union is already well advanced. Those active in the Federal Union will always be the most eager to go furthest, fastest towards this goal. But this eagerness should not blind us to what has already been achieved, and to the fact that Giscard’s Convention will inevitably mark a further step in the direction we are determined to travel.

Brendan Donnelly is a member of the Executive Committee of Federal Union, and can be contacted at [email protected]. The views expressed in this article are those of the author and not necessarily those of Federal Union. First edition, December 2002.

Read this article as a pdf at workinprogress

Federalist letter to the European Convention