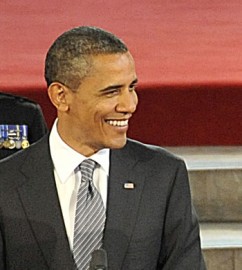 It sounds great, but is it really true?  Here’s a test.

The post of Managing Director of the International Monetary Fund has fallen famously vacant, and a successor is desperately sought.  Several European states are in severe financial difficulty and the IMF ought to play a key role in helping them out of it, but will find it hard to do so as long as it lacks proper leadership.

This blog has commented elsewhere on the automatic assumption that a European should be appointed to the post (we are against) but beyond the nationality of the candidates, there is also the composition of the selection panel.  Ordinarily it would be composed simply of government representatives, haggling and fixing behind closed doors until agreement is reached.  But, as Dominique Strauss-Kahn is learning, what goes on behind closed doors isn’t necessarily acceptable to the rest of the world.

So my test is to see whether the appointment process can be changed at all.  And there is a good political precedent for what I am about to suggest.

It has long been a principle of accountable government that there should be some kind of external check on the way that public money is spent.  The struggle between king and parliament in the 1630s over Ship Money, which Charles I claimed the right to raise and spend on his own account, was a substantial factor in the build-up to the English civil war.  And no-one reading this blog should need reminding of the significance of “No taxation without representation” in the American revolution.

This principle is relevant again because what the IMF does, in effect, is to spend public money.  It takes contributions from its member states and lends that money to countries that need the money.  It attaches conditions to its loans, too, which is why it is controversial, and which cry out for accountability.

Given that it is public money we are talking about, let us invoke the demand of parliament again, that it should not be left to the executive alone to raise and disburse money.  A panel of national parliamentarians should be convened to interview the candidates for the post (or at least the nominee put forward by the national governments) and put down markers for how the job should be done.  Thereafter, at periodic intervals, that panel should reconvene to see how things are getting on.

It should not be left solely to national governments to take decisions about public spending – citizens have an interest, too, which may well be separate from the interests of their elected leaders.  Here is a proposal that protects the rights of citizens as well as the rights of nations.  Mr President, over to you.