The trial of Tzipi Livni

The trial of Tzipi Livni 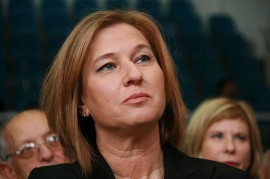 Let me say at the outset that there is no simple answer to this question. The development of the law in theory has outstripped the implementation of the law in practice, which is bound to create difficulties. I shall come back to this theme.

The facts are simple. Tzipi Livni, who was Israeli foreign minister at the time of the Gaza war in January of this year, was due to attend an event in London. Campaigners against that war in Gaza secured a warrant for her arrest on charges of war crimes. She cancelled her visit and addressed the event by video link.

I should have opened that previous paragraph saying that some of the facts are simple, for others are not. The allegations of war crimes arise from a report by UN Special Prosecutor Judge Richard Goldstone, and its genesis and conclusions are hotly disputed. The existence of the dispute is sufficient for the purposes of this blog entry.

The issue of the arrest warrant was founded on the principle that war crimes can be tried in the UK, wherever in the world they were allegedly committed. This principle of universal jurisdiction is held up as an expression of the outrage against humanity that certain criminal acts embody. Piracy is traditionally held to be such an offence; war crimes and genocide naturally fall into the same category.

Argument about the issue of the arrest warrant and the cancellation of Tzipi Livni’s visit have elsewhere centred on the foundedness, or otherwise, of the Goldstone allegations and also the fact that the English legal system does not require evidence before a warrant is issued: whether or not there is a case to answer will be dealt with when a trial comes, and not before.

The first of these two issues might be addressed in a subsequent blog entry, but what I really want to address is the idea of universal jurisdiction. It is an example of the mismatch between powers and levels of government. For if a crime is genuinely an offence against the whole of humanity, then it should not fall to an individual state to bring the prosecution. It should be an international court that should fill this role.

Leaving the conduct of international prosecutions to the actions of national courts will not bring justice. It invites too many politicians into the process: whether or not a prosecution is merited on an international issue is to be decided by officials in another country who are accountable only in that country. If the outrage is shared, should not the reaction be shared, too?

We have a half-formed notion of international justice. The desire to implement it has outstripped the political institutions that are needed to implement it, and trying to use our existing political institutions for this new purpose is producing uneven and unjust results. Leaving it to individual countries to decide how to pursue allegations of war crimes will fragment the efforts against them.

Better to recognise that we are dealing with a new type of crime and need a new type of court. I am not going to comment here whether or not she should be tried, but Tzipi Livni should not be tried in England.