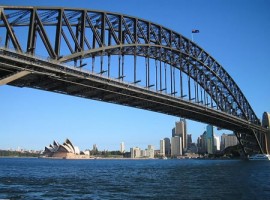 On one side, there is the development of communications and transport connecting the different states together – “Australians treat aeroplanes like buses”, said Geoff Anderson – which encourages the strengthening of the federal level. The Australian business community firmly supports the moves for efficiency, in the form of “a seamless national economy”: the qualifications for hairdressers and plumbers in one state are not recognised in others, for example. This is the political consensus. Anyone who attempted to raise a discussion about states’ rights would be seen as an economic wrecker.

There are other examples, too, where decision-making is perhaps too decentralised. The Murray-Darling river basin, which flows through four states, lacks a common approach to managing abstraction rates, so it is often at very low levels and sometimes even dries up altogether.

The notion of subsidiarity, in which powers are exercised at the most appropriate level, would be very relevant here. But Geoff Anderson also described how centralisation could go, in some respects, too far.

The fact that Australia had signed an international treaty of the protection of habitats gave the federal government the right to intervene in state government decisions on infrastructure questions, according to a judgment from the High Court of Australia. Australian participation in the war on terror had led to the federal government, which does not have the competence for law and order, imposing expectations on the state governments, which do. And a feature of the constitution which permits the federal government to attach conditions to its financial transfers to the states had, unsurprisingly, led to a great many such conditions being attached. Schools, a state responsibility, would only get funding if they had working flagpoles, for example, and followed a standard history curriculum.

One of the factors encouraging this development had been party political. For a number of years recently, the federal government had been Liberal while all the state governments were in the hands of the Labor party. The debate about the best level at which to enact a particular policy had therefore become entwined with a debate about which policy to follow.

There were no obvious answers to these dilemmas. A further factor in the centralisation of Australian politics is the national media, that demands that national politicians take action even on matters that could (and should) be decentralised. The politicians themselves are able and happy to oblige. The Australian federal constitution does not appear to have enough protections for the rights of the states, and power accretes upwards.

It is not inevitably the fate of a federation that power should become more centralised: the whole point of federalism is to ensure that it cannot, but the factors that kept Australia decentralised – the sheer size of the country, its origins as a set of separate colonies – have grown less important as time has passed and the factors that reward centralisation – economic liberalisation, environmental impacts – have become stronger. I did not get the impression from Geoff Anderson that decentralisation and diversity are generally seen in Australia as values in their own right. I think that is probably a pity.