The wrong protest about fracking

The wrong protest about fracking 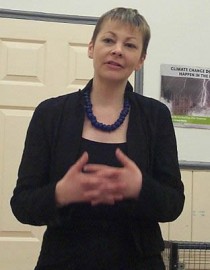 Green MP for Brighton Pavilion Caroline Lucas writes in the Guardian today about being arrested for protesting against a fracking development in rural Sussex.  Fracking is a new technology enabling natural gas to be extracted from previously inaccessible sources, and has transformed the gas market in the United States.

Gas is of course a fossil fuel, and while it produces less carbon dioxide than coal or oil when burned, it is still a contributor to global warming.  Do we really need to develop new sources of fossil fuel in the countryside?

We don’t need the gas.  The world is not short of fossil fuels – the peak oil theorists were wrong – and in fact, in the context of fears about climate change, we’ve already got too much.  The amount of fossil fuel already known to be in the ground would, if dug up and burned, cause irreparable harm to the atmosphere.  A lot of it is going to have to stay unexploited.  The development of new fields of gas that can be obtained by fracking means that even more of the gas from traditional sources will have to be left undisturbed.

The advantage of fracking is that it is cheaper to get gas out of the ground nearer to home than it is to import it from elsewhere and possibly, expensively, have to drill for it in deep ocean waters.  The benefit of fracking is not more gas but less money.

There is an argument that it is better for reasons of geopolitics and national security not to rely on foreign energy sources more than necessary.  That so much of the world’s oil comes from unstable countries in the Middle East (and the presence of oil is one of the reasons they are unstable) is an additional spur to developing domestic alternatives.

For the UK, the main sources of natural gas imports are Norway and the Netherlands, which are hardly to be considered unstable or unreliable trading partners.  There is no strategic case for developing domestic production, only a financial one.

And because gas is so widely and readily traded, even the financial case is not as strong as it might look.  Fracked gas from Sussex will not sell at the low cost of fracking it, but at the higher cost of importing it.  That’s how markets work.  A new competitive source of supply will tend to bring prices down a little, but prices will not fall far below where they are now.  The impact of fracking on prices in America has been much more dramatic because gas there is not so readily traded internationally.

Given that the case for fracked gas is all about money, there is no reason to give it a tax treatment more favourable than other competing fuels, and there is no reason for the state to get involved in paying compensation to local communities.  If a fracking rig reduces house prices in the area in order to make money for whoever is extracting the gas, the gas company can pay suitable compensation itself.  It’s all and only about money.  (And that way, we will see whether or not fracking really is a cheaper way of getting gas.  Funny that the free marketeers in the government are not advocating this.)

Anyway, back to Caroline Lucas.  I can appreciate that Balcombe is close to her constituency in Brighton, but Balcombe is not the problem.  If companies choose to make money one way rather than another, within the law, then that is no matter for politicians.

If she is concerned about climate change, the places to protest are (1) the Treasury, whose policies are impeding the preparation of the UK for a low carbon economy, and (2) the Foreign Office, whose policies are not delivering the global agreement and institutions necessary to cut carbon emissions by leaving fossil fuel in the ground.