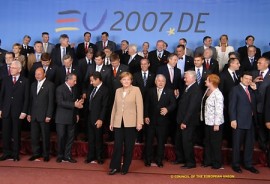 The last important step in the European integration process was taken in Maastricht in 1991, when the then 12 member states of the European Union decided to establish an economic and monetary union. The EU has more than doubled in membership since that period and the governments and respective Heads of State of the EU Member States have, through the instrument of Intergovernmental Conference, tried to introduce, without success, the necessary reforms with which to face the challenges of further enlargement, globalization, sustainable economic development and the construction of peace. Only through Conventions, during which were present representatives of the people – from both the European and national parliaments – and not just of governments has it been possible to approve, first the Bill of Rights and then the Treaty establishing a European Constitution. The European Constitution has, up until now, been approved by 67% of Europe’s Member States and 56% of its citizens.

Maintaining the principle that all Member States of the European Union are equal, it must follow that in a democratic community, the majority of States and citizens, if they wish to do so, must be allowed to follow through with their decisions without being hampered by the veto of a single State, whichever it may be.

The UEF, even though it has criticized the text of the Constitution because it preserves the veto right on fundamental matters, the ratification process included, has however recognized that the text represents a step forward from the current situation as it grants more powers to the European Commission, European Parliament and ultimately to the European citizen. The Constitution will bring an end to the process of treaties, establishing a pact between citizens and States, granting them a common democratic government. Abandoning the Constitution and returning to a Treaty of some sort, which some governments would like to see, does not only have an affect on the form but also on the substance as it is a pact that unites citizens and European institutions

The true reason why some governments, in an attempt to get out of the impasse produced by the negative votes of France and the Netherlands, are proposing to replace the Constitution with a Treaty is because they fear facing the European electorate. A new Constitution that takes the citizens’ criticism expressed during the ratification process into account would have to be submitted to a new referendum in those countries which have already ratified the Constitution. Governments wish to get around this problem by submitting a Treaty which need only be ratified through parliamentary procedures. This is a dangerous illusion. Not only is it highly possible that in some countries, political forces will demand popular ratification but the risk that a large part of the institutional reform proposals will be seriously eroded is high. Euro-skeptics have exploited the rejection of the European Constitution, claiming that citizens don’t want a stronger and more united Europe. A new Intergovernmental Conference, where citizens’ representatives are not allowed to speak, runs the risk of being dominated by countries that intend to reduce the level of integration thus far attained. If pro-European governments show themselves timid and on the defensive, it won’t be hard to imagine what the result will be after the 27 European Member States take a unanimous decision.

The UEF asks the Heads of Government, gathering on 26 January in Madrid:

1. to submit to the European Council a request to convene a new European Convention with a limited mandate in order to change only the more sensitive parts of the Constitution (in the European Parliament some suggests to modify only parts III and IV) so that the representatives of the European citizens will be able to amend the constitutional Treaty in a short period of time;

2. to engage themselves so that the new project of the European Constitution is submitted to the European citizens in a consultative referendum, to be held at the same time as the European elections in 2009, simultaneously in all European countries;

Europe finds itself at a crossroad. European citizens want a more democratic union, which is able to act and speak with a single voice. This is particularly the case in foreign policy as the international scene is seeing the rise of new powerful global actors. The European governments have the future of Europe in their hands as they know that Euro-skeptics can only be beaten if citizens are given the truth. The truth is that Europe must be democratically governed, that a European democratic government is possible and that the Constitution represents a decisive step in this direction.