What should parking pay for?

Home/Blog, UK/What should parking pay for?

What should parking pay for? 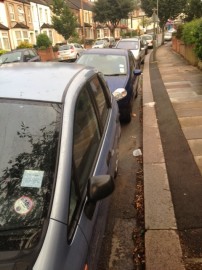 Keeping the property tax bill down: cars with their parking permits

Away from the big picture of world trade and globalisation, let’s look at the important issue of parking charges.  What should it cost to park a car outside your house?  And, more importantly, who decides?

Other than the fact that the street where I live is one where the council attempted to put up the charges (and I will get a fat refund of the excess I have already paid), there are two aspects of the case that this website is interested in.

First, there is the fact that local councils are forbidden from making a profit on parking.  They are allowed to levy fees (1) to manage demand for parking and (2) to cover the costs of running the scheme.  It became apparent from the internal deliberations of the council revealed in court that the wider Barnet transport budget relied, illegally, on residential parking profits, with the effect of keeping property taxes down.

A federalist might prefer an arrangement whereby local councils can decide for themselves how they want to raise money.  If they want lower taxes on property and higher charges for services, that should be up to them.  But England is not a federation: councils may raise taxes only insofar as parliament allows them, and parliament has not said that parking is a permitted way to raise taxes.  That’s what the intervention of the court has upheld.

But even if Barnet council did have the power to raise tax revenue in this way, there still might be a role for the courts.  This is the second interesting aspect.

For an important feature of the case is that residential parking charges, i.e. for the right to park on the street outside your house, are payable only by 8 per cent of the households in the borough.  These are in the streets where demand for parking spaces will, at some point during the week, exceed supply.  There are 30 Controlled Parking Zones in Barnet, near tube and railway stations or shopping streets, and parking charges protect space for the residents from visitors.  Residents benefit from the system, and so it is fair that they should pay for it.

To use the system to raise money for the benefit of the borough as a whole, though, taxes that 8 per cent on behalf of everybody else.  And the tight geographical definition of who is within that 8 per cent becomes, in Barnet, potentially interesting.  Any power to draw lines of legal significance on maps has the potential to be abused, and so that power needs to be kept in check.

In my part of Barnet, the most common two surnames in the three nearest wards are either Cohen and Levy, or Smith and Jones, or Patel and Mistry.  The scope for abuse is obvious.  If the council is given the right to raise general revenue by levying charges, there must be protections against the use of this right in a discriminatory manner.

Constitutional protections for the rights of minorities are just as much a part of our understanding of federalism as the exercise of power at the lowest possible level.  A federalist approach to local government would not forbid councils from raising money from parking charges, but would ensure that however they raised money, they did so fairly.