Which parts of the treaty are the most important?

Home/Blog/Which parts of the treaty are the most important?

Which parts of the treaty are the most important? 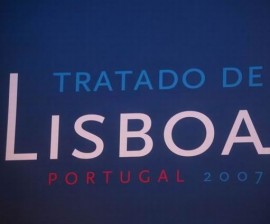 I received a response to my article on the idea of a referendum on the Reform Treaty (which you can read here) asking “what do you mean by: ‘The parts that have been changed – those of a constitutional nature – were the most important parts.’ Which parts are you referring to?”

This is a good question, which sheds light on an interesting aspect of the debate about the Reform Treaty. Which were the important parts of the former Constitutional Treaty that merited a referendum, and have they been carried over into the new text?

The Reform Treaty proposed to make various changes to the European Union: let us examine each of them in turn.

First, there are the powers of the Union. Does the EU acquire new policy competences that demand a referendum? The answer is surely no. It remains to be seen exactly what the final wordings will be on competences, but modest ideas like space policy were the extent of any new powers for Brussels in the old text. That isn’t enough for a referendum.

Next, there is the way in which those powers are exercised. The biggest changes here are the extension of co-decision for the European Parliament to all legislation and the whole of the budget. Agricultural spending has been outside the control of elected parliamentarians up until now: with the Reform Treaty, that will change. Welcome, yes, but constitutionally deserving of a referendum?

The European Parliament will not only gain greater say over legislation but will also acquire the right to exercise greater influence over the European Commission. The link between the European elections and the choice of Commission president will be strengthened. If this works as it should, then it could increase considerably the standing of the president of the Commission, no longer an unelected bureaucrat, instead a politically accountable figure. Maybe this is constitutional in nature. The drawback for the argument that it is lies in the facts that (1) it might not happen, even if the Reform Treaty is passed, and (2) it could happen anyway, even without the Reform Treaty. The Reform Treaty will make it more likely, but will not guarantee it. What will guarantee it is the willingness of political parties to coalesce at the European level and fight elections in tandem. Is the willingness of a group of politicians a constitutional matter? I don’t see how it can be.

Next, the Council of Ministers will meet in public. Again, it would be possible for the Council to adopt rules along the lines suggested in the Federal Trust paper on openness here without the new treaty and still possible that it might defy the new treaty and adopt rules that are less far-reaching than these. It is a matter of potential, again, and there is no obvious moment at which this becomes a constitutional matter.

On foreign affairs, there is a bit more to take an interest in. There will be a concrete and distinctive change as a result of the new treaty, in that the same person will be both chair of the foreign affairs council and vice-president of the Commission. The reason for this is to give a clearer expression to European foreign policy, once such a foreign policy has been made. The way in which foreign policy actually is made, though, won’t change: the rule will remain unanimity for policies and QMV for implementing those policies. Does this then amount to a constitutional matter? Only I suppose if one attaches a constitutional value to the principle that the EU cannot act on the basis of its own decisions, and even the Eurosceptics object to the gulf between rhetoric and action within the EU.

The European Council will acquire a chair, chosen to serve a 30 month term as opposed to being rotated in to a 6 month term. A change? Yes. Constitutional? I doubt it. The powers of the new president of the European Council are almost zero. Some opponents of the treaty have complained that the holder of the new post will have an official residence. Do we now have to have a referendum on giving someone a house?

The Charter of Fundamental Rights will fill in a loophole whereby member states are at present subject to human rights provisions in the course of their own actions but not in the course of implementing those of the EU. Frankly, not giving legal force to the Charter of Fundamental Rights – consciously to maintain a hole in the protection of human rights in the EU – is a bigger diversion from European constitutional practice, but no-one has been demanding a referendum on the absence of the Charter.

One of the principal beneficiaries of the Reform Treaty will be members of national parliaments, who will gain new rights to scrutinise legislative proposals from the Commission and new abilities to scrutinise the actions of their national ministers in the Council. Whether national parliaments make the most of these powers is down to them, not the treaty, and in any case the assertion of parliamentary control over executives is the restoration of how things used to be. As with the Charter, not making this change might be cause for a referendum.

Most importantly, there was the whole notion of a constitutional text altogether. This amounted to a replacement of the previous tradition of amending treaties with a new foundation for the future of the European Union. In some constitutional traditions, this is an important step and is not to be taken lightly. In others, it seems to matter less. Whichever tradition one is placing this document in, that constitutional notion has nevertheless been dropped. However important it was, though, the absence of this provision from the Reform Treaty cannot be a reason for a referendum on that treaty. Its presence might be: its absence isn’t.

But asking which part of the Constitutional Treaty bore the constitutional significance that required a referendum is a trick question. Tony Blair’s call for a referendum was not made on constitutional grounds. It was a political move taken in order to strengthen his party’s prospects in the 2004 European elections. To invoke constitutional principles is therefore rather to miss the point.

The argument about whether there should be a referendum on the Reform Treaty depends not at all on the actual contents of the Reform Treaty, but only on the contents of the Labour manifesto in 2005. The argument that the new treaty is sufficiently different from the old one so as to render the previous commitment invalid likewise is a political one and not a constitutional one. Myself, I think there’s a lot in it, but then I think that calling for a referendum once the text is written is the wrong way round.

Constitutional significance arises as much from the method of ratification as from the contents of the text, in any case. A referendum would bestow a standing upon the document beyond that of any treaty ratified merely through parliament. Given that fact, a referendum should be reserved for a document that really justifies it. There are considerable improvements needed in the ability of the institutions to act in the areas of economics and foreign affairs, for example, beyond those that are likely to be contained in the Reform Treaty. I would prefer to see those proposals written down in a treaty and put to a referendum, everywhere in Europe, on the same day.